Vancouver, BC, hardcore punk pioneers finally capture the power of their live show with Northern Avenger, out tomorrow. 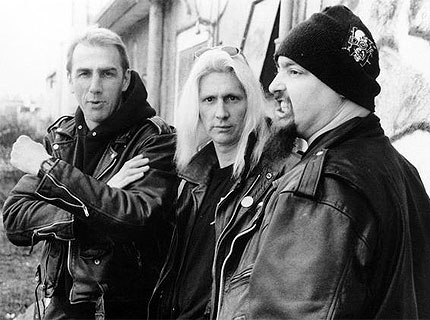 What? For 30 years legendary Canadian hardcore outfit D.O.A. has released a steady stream of records that marry Black Flag’s raw power, Bad Brains’ knee-buckling speed, and Minor Threat’s lyrical intelligence with the angst of the Sex Pistols and political messages of early Clash singles. The result is simple, forceful, and anthemic songs that rarely break the 90-second mark — but always break barriers in the punk scene.

Tomorrow the band release their 12th studio album, Northern Avenger (Sudden Death), and, for the first time, they receive proper production oversight courtesy of legendary producer and fellow Canadian Bob Rock (Metallica, Motely Crue, Bon Jovi). Though seemingly counterintuitive for a political punk band of this flavor to team with one of pop’s production titans, Rock harnesses their blistering guitar riffs and thundering drums into an album that’s bursting with attitude. Finally, D.O.A. sound as confrontational on record as they do live.

Who? Founded in 1978 by singer/guitarist Joey “Shithead” Keithley, D.O.A. quickly established a code of conduct — “talk minus action equal zero” — and dropped their debut EP, Disco Sucks, the same year. The band then released a pair of genre-defining albums, Something Better Change in 1980 and Hardcore ’81 in 1981, the latter of which is largely credited with coining the term “hardcore punk.” Legendary sticksman Chuck Biscuits — D.O.A.’s original drummer — added a heady array of rhythmic prowess that few bands could match at the time and would later play in Black Flag, Danzig, and Social Distortion.

Keithley is the D.O.A.’s only remaining original member (some 15 people have occupied bass and drum duties). He also continues to run DIY punk label Sudden Death Records, which he founded in 1978, and in 2004 issued an autobiography, I, Shithead: A Life in Punk.

Fun Fact: In 1996 and 2001, Keithley ran as the Green Party candidate in the British Columbia provincial elections. In 2001, he received the second-highest percentage of the vote. We like to think his campaign posters read: “Vote Shithead.”