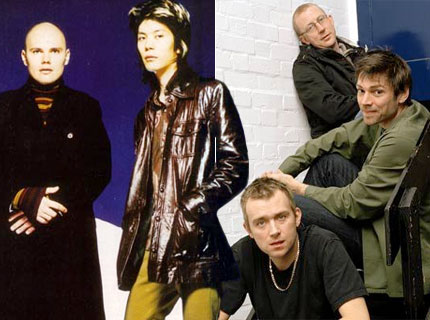 These days, rumors of artist collaborations start more quickly than you can say, “The lead singer of Hootie and the Blowfish has the No. 1 Country album.” Below, we weed through the reports to set the record straight.

James Iha and Billy Corgan: After a dissatisfied fan at the Smashing Pumpkins show in D.C. commented that the band no longer “rocks” and inquired about former guitarist James Iha’s whereabouts, Corgan pulled another fan from the audience and referred to her as “James Iha,” then asked what she’d been up to. VERDICT: Mismatch! [Via Rollingstone.com].

The Faces’ Rod Stewart, Ron Wood, Ian McLagan, and Kenney Jones: It looks like a reunion for the Faces could be in the cards. That is, if a certain rehearsal goes well. On the agenda: “To check if they can remember the songs.” VERDICT: Match! [Via Billboard.com]

Stereophonics and Welsh Boxer Joe Calzaghe: For those of you who assumed that just because Oasis have enlisted boxer Ricky Hatton in a bid for a number one Christmas single, that that would mean that everyone would be doing it, well shame on you. “I know Joe but I haven’t seen him for a few years,” Stereophonics frontman Kelly Jones told BBC 6 Music. “We used to play charity football matches together but I don’t know where that story’s come from.” As for the Evander Holyfield / My Chemical Romance duet, well, here’s hoping. VERDICT: Mismatch!

Cat Power and Aretha Franklin: Okay, this one’s sort of true. Cat Power has announced that she’ll be releasing an EP titled Dark End of the Street on December 8 featuring leftover tracks from her recent album of covers, Jukebox. In addition to Aretha’s “It Ain’t Fair” the album will also include such covers as Creedence Clearwater Revival’s “Fortunate Son.” VERDICT: Match! [Via NME.com]

Tokio Hotel and Miley Cyrus: “We met Miley Cyrus at the VMAs, but that [rumor that she will be on our next album] is not true,” Tokio Hotel frontman Bill Kaulitz told MTV. “We never thought about that. I think a big dream would be to do something with Aerosmith or someone like that.” Jeez, Tokio Hotel. Shouldn’t what’s good for the Obama kids be good for you too? VERDICT: Mismatch!