"I call the shots," the punk frontwoman said of her new band. Click here for details on Spinnerette's debut album! 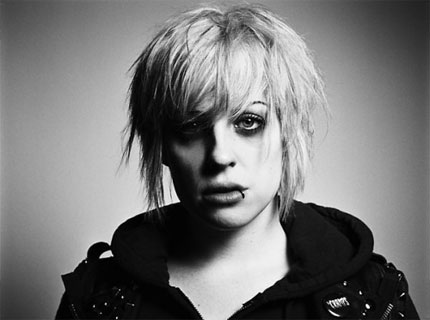 It’s been over a year since we last heard from former Distillers singer/guitarist Brody Dalle. But now that the debut album from her new project, Spinnerette, is set to drop in early 2009, she’s back!

Speaking to NME.com about the currently untitled record, Dalle — wife of Queens of the Stone Age’s Josh Homme — laid out her reasons for leaving the Distillers to form Spinnerette. “I didn’t want to do a fucking monkey dance for people who don’t care about art. I want to be more art focused and call the shots.”

Dalle also revealed that the Spinnerette album was inspired by the birth of her daughter and death of her father, and explores the “redemption, salvation, and religious themes.”

Fans can expect the record to be self-released sometime in February, eschewing major label bureaucracy. “The state of the industry has pushed us into wanting to put the album out ourselves. I’m not interested in getting entangled into the system. I just got out of a deal and I walked out with my record, thank God, and I’m really grateful for that.”

Brody, if you need any tips on how to self-release a record, we know of a certain band that might be able to help…

The Distillers Are Back and Heading on Tour