The SoCal rabble rousers are hanging out for the first time since the band's split in 2005. Click here for details! 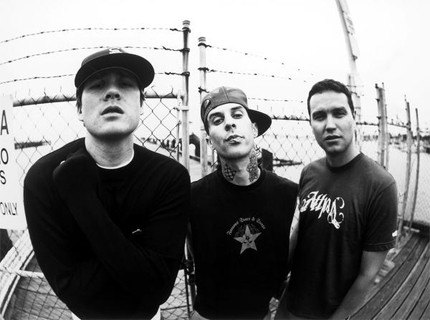 It appears tragedy has bred nostalgia in the Blink-182 camp. The September plane crash that left drummer Travis Barker in the hospital with critical second- and third-degree burns has brought the three SoCal rockers together to hang out for the first time since the band’s split in 2005, sparking rumors of a full blown Blink-182 reunion.

“In the midst of everything else that has happened lately, Tom [DeLonge], Travis, and I have all spoken together,” bassist Mark Hoppus wrote to his blog [via MTV.com]. “First, through a number of phone calls, and then a couple of weeks ago we all hung out for a few hours. They’ve all been great, very positive conversations.

“We’re just reconnecting as friends after four years of not talking,” he continued. “Obviously the first question for a lot of people will be, ‘Does this mean a Blink-182 reunion?’ The answer is none of us know… the events of the past two months supersede everything that happened before. Life is too short.”

And, as Hoppus said just last week, Barker is recovering quickly and hopes to be back in the studio soon. It certainly seems all the cards in place for a Blink reunion: DeLonge’s Angels & Airwaves just wrapped a North American tour opening for Weezer and have nothing on the calendar; Hoppus and Barker are itching to get back to the studio; and Hoppus already has new material in the works. “I’ve been writing a bunch of stuff and getting a lot of songs together,” he said.

Guys, do it — there’s about 15 millions fans awaiting your return!