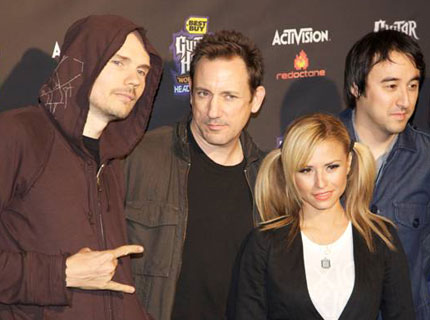 Who better to be the first to try the latest Guitar Hero game, Guitar Hero World Tour, than world-touring rock stars? This past Saturday (Oct. 25), members of Linkin Park, All-American Rejects, and the Donnas joined celebs like Karina Smirnoff, Mischa Barton, and Adam Gregory to check out the game and a special performance by the Smashing Pumpkins, whose new song “G.L.O.W.” graces the soundtrack. To celebrate the launch, all guests got the rock-star VIP treatment and walked away with a full version of the game.

Check out our photos from the event!