This is starting to get like Dreamgirls. But we've got a suggestion, Pipettes. Listen up! 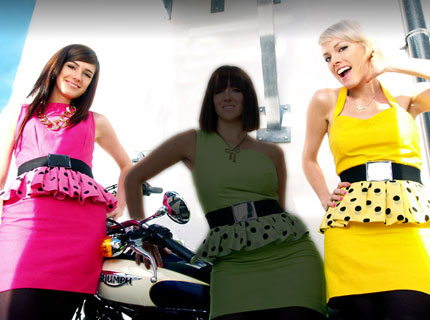 The “pip” supply is once again plummeting in polka dot land: Another Pipette has bid adieu to the Pipettes, leaving the girl group down to two members and just barely hanging on to the “s” at the end of their name.

It was back in April when the girls broke the news that two of the original Pipettes –RiotBecki and Rosay — were leaving the band and would be replaced by Ani and Anna. That gave Gwenno the distinction of being the only member without an ‘An’-derived name and the only one to appear on the group’s 2006 debut album, We Are the Pipettes.

Well, it looks like change is afoot again. According to the band’s MySpace page, “Anna MacDonald has abruptly announced her decision to pursue a songwriting career outside of the band.” The post ended on a bittersweet note: “Our quest for the perfect Pipette continues…”?

Ladies, have you tried looking in Smurf Village? It’s mostly dudes, but there’s this chick that lives there and we’re pretty sure she’d be perfect.