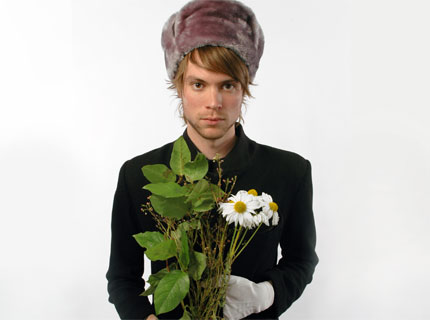 What? Not only is Alaska in Winter more deserving of the title “maverick” than its eponymous state’s governor, the electronic project is also far more versed in foreign policy. Dance Party in the Balkans, the group’s 2007 debut, married robotic cadence with traditional Eastern European tones, fleshed out by dramatic strings and emotive vocals from frontman/Grand Poobah Brandon Bethancourt. This month’s follow-up, Holiday, takes a trip to Berlin — and in AIW’s Germany, life is a cabaret.

Vocoder melodies and upbeat lyrics tell stories of high-speed boat races (“Speed Boat to Heaven”), a man who “stays awake all night to avoid the sunlight” (“Keep Your Boots Clean and Everything You Step On Is Dirt”), and hard-partiers in need of some pacing (“Korrpromenade”). Even at its most serious, the album’s unfaltering replication of a never-ending European dance party fills you up and never lets you down. With an album cover that features both a keytar and a font that calls to mind arcade video game Cruis’n USA, how could it be anything but fun?

Who? After dropping out of art school in his native New Mexico, Bethancourt spent a winter semester in — you guessed it — Alaska to escape from responsibilities and reflect. Though he meant to take a break from music, solitude bred creativity and he wound up writing the songs for AIW’s first release from his frigid cabin. This year’s album follows Bethancourt’s quest for the perfect party to Europe — and if his foreign-exchange melodies sound at times reminiscent of another musically inclined Albuquerque native, thank high school-chum-turned-collaborator Zach Condon of Beirut.

The two teamed up when Bethancourt returned from Alaska, and Condon reprises his role this time ’round with backing vocals and ukulele on album opener — and standout — “We Are Blind and Riding the Merry-Go-Round.” Holiday also features violin from A Hawk and a Hacksaw’s Heather Trost.

Fun Fact: Hausmusik isn’t the only thing that’s rubbed off on Bethancourt since moving abroad: He’s taken to giving interviews in a phony German accent, as can be seen on his MySpace blog.

Exclusive Video: Alaska in Winter, “Staring at the Sun” (Live)