Video: Green Day in the Studio

Honestly, the video kinda sucks, but it's still great to see Billie Joe strumming along to snippets of new tracks. 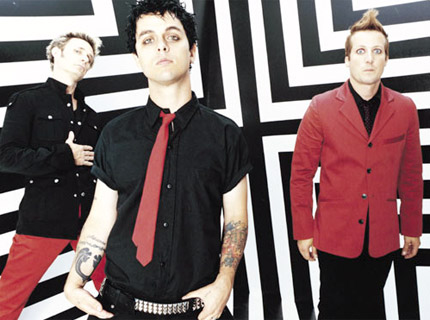 Details about punk pop luminary Green Day’s next full-length have been few and far between since we last checked in with the boys. But according to ex-Garbage frontwoman Shirley Manson — and confirmed in the video below! — the band is hard at work on the follow-up to 2004’s American Idiot — and they’ve recruited a familiar producer to man the soundboard.

In a sit-down on Last Call with Carson Daly to promote her acting role in TV’s Terminator: The Sarah Connor Chronicles, Manson dropped a juicy tidbit when asked about the status of a new Garbage record. “I don’t know, to be honest,” Manson explained. “We’re sort of doing our different things. I’m doing the TV show, Butch [Vig] is producing Green Day, so he’s busy, we’ll see.” [Via MTV.com]

On the heels of Manson’s comments — as well as a few other recent rumors — the band have posted a YouTube video showing frontman Billie Joe Armstrong and Vig in the studio hard at work on the trio’s forthcoming album. Below, check out the footage — with explicit finger gestures courtesy of Vig — featuring Armstrong strumming away at his guitar as instrumental tracks from two new songs play in the background.