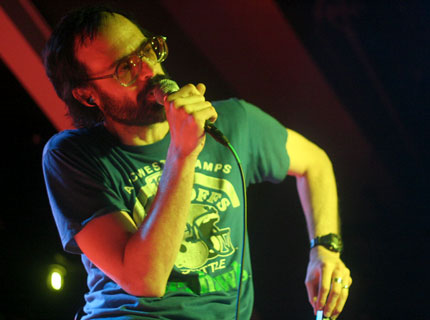 Before a raucous and enthusiastic audience of indie diehards, Berman captained his backing band (composed of four members, including his wife Cassie on bass) through an hour-long set that drew equally from all periods of the band’s extended discography. But, as many have noted, you don’t really listen to the music with the Jews — it’s all about the words. Bent, spun, punned, and transformed into metaphors, Berman’s lyrics are truly cryptic.

The band kicked off their show shortly after 10:30 P.M. and dove into cuts both classic and new, including many off 2008’s Lookout Mountain, Lookout Sea. Opening with “I’m Getting Back Into Getting Back Into You,” taken from 2005’s Tanglewood Numbers, the quintet worked through inspired versions of fan faves like “Random Rules” and “Smith & Jones Forever,” both culled from the Jews’ magnum opus, 1998’s American Water. Other highlights included “New Orleans,” “Trains Across the Sea,” and “Pretty Eyes.” A short encore, the centerpiece of which was “Tennessee,” brought the festivities to a close.

Travis Greenwood
Tags: monotonix, Silver Jews, We Were There