The Sea and Cake

Chicago post rockers turn up the volume on their eighth studio album, Car Alarm, out this week. 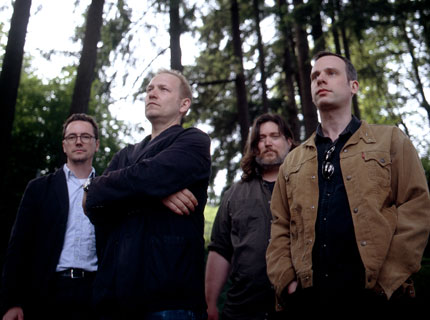 What? Much like their namesake, Chicago post-rock quartet the Sea and Cake have created music that combines a subtle sweetness with an impossibly cool beachside vibe, thanks to a mix of electronic sounds, Krautrock styles, and strong post-jazz influences. After the jigsaw puzzle austerity of last year’s Everybody, the Sea and Cake return this week with their eighth studio album, the propulsive Car Alarm. Inspired partly by the birth of vocalist/guitarist Sam Prekop’s first son, Car Alarm effervesces with bursts of energy while harking back to the silky-smooth pop of 2000’s Oui. For a taste of the record’s rockier direction, stream the title track below.

Who? Named after a misinterpretation of “The C In Cake,” a song written by experimental rockers Gastr del Sol, the Sea and Cake originally formed as a one-off project in 1993 when Prekop and bassist Eric Claridge’s band the Shrimp Boat split. The two joined with Archer Prewitt (guitar/piano/vocals), alumnus of the Coctails, and Tortoise drummer John McEntire (percussion/drums/synthesizer) and released their self-titled debut in 1994. The band achieved widespread acclaim with Oui, while each member maintained numerous other projects. Between albums (and during a hiatus in the early millennium) Prekop and Prewitt released solo records and focused on artwork, while McEntire continued with Tortoise, and Claridge dedicated himself to painting.

Fun Fact: McEntire may hit the skins with the Sea and Cake and seminal post-rock collective Tortoise, but he’s also an accomplished producer who’s worked on records by Bright Eyes, Kaki King, and the Fiery Furnaces, among others.

Now Hear This: The Sea and Cake – “Car Alarm”

The Sea and Cake – “These Falling Arms”