The master rocks the classics in St. Paul, with his disciples Death Cab for Cutie and Everest opening the show. 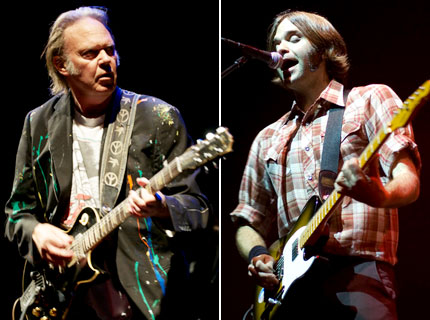 First up was SoCal five-piece Everest, who held their own with a dynamic sound rich in countrified guitars that supplemented their effortless harmonies. The outfit’s relatively short performance set a tone that could have segued seamlessly into Young’s performance. But Seattle’s Death Cab for Cutie had other plans.

The quartet — who open the first leg of Young’s tour before being replaced by Wilco — stuck to favorites from their last two albums, 2008’s Narrow Stairs and 2005’s Plans. Understandably, the band initially seemed a little nervous, but soon the worry wore off. Before long, frontman Ben Gibbard led them to rock out in a way strikingly similar to the Peanuts gang dancing in A Charlie Brown Christmas. Awww. They breezed through the rest of their set of moody, well composed tracks, including such highlights as the radio-friendly “Soul Meets Body” and “I Will Possess Your Heart,” before wrapping it all up with Transatlanticism’s”The Sound Of Settling.”

The effervescence of both opening bands was a fabulous introduction, but this was Neil Young’s show.

From the start, his set became a veritable greatest hits collection. Young and crew wielded electric guitars, pounding out staples like “Hey Hey, My My,” “Cortez the Killer,” “Everybody Knows This Is Nowhere,” and “Cinnamon Girl.”

Then they shifted into a powerful acoustic portion that featured “Helpless,” “The Needle and the Damage Done,” and “Old Man,” among others.

But the tender moments were short-lived, and soon the crack band blasted back into rock glory with Young hulking around the stage, fully locked in on his six-string. Studio vet Chad Cromwell sat in on drums, with longtimeYoung sideman Ben Keith on pedal steel guitar, Rick Rosas on bass,Anthony Crawford on piano and guitar, and Neil’s wife Peggi on backing vocals.

As the show came to a close, “Cowgirl in the Sand,” a lengthy jam off 1969’s Everybody Knows This Is Nowhere, offered a reliable treat before set-closer “Rockin’ in the Free World” spurred a crowd sing-along.

But there was even more to come, as Young and Co. returned for a rare encore cover of the Beatles’ mini-epic “A Day in the Life.”

It turned out to be a much better than normal day in the life at that.

Jen Paulson
Tags: death cab for cutie, Neil Young, We Were There