Mother Mother, Smiths’ Bassist Turn Out for SPIN at CMJ

Mother Mother and the Homosexuals play late-night soiree in Brooklyn, while Andy Rourke of the Smiths and MC Hollywood Holt rock the decks in Manhattan. 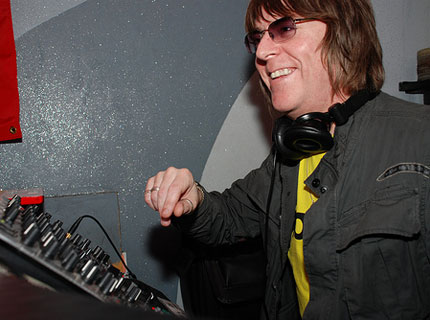 SPIN and the Musebox partnered for two nights of fun during one of New York City’s most exciting — and hectic — weeks for independent music: the annual CMJ Music Marathon.

Kicking things off at downtown hotspot Beauty Bar on Oct. 21, Andy Rourke hit the turntables, spinning classic punk and tunes from his legendary band, the Smiths, and helped to usher in the start of the week-long, independent music conference.Chicago-based MC Hollywood Holt took over DJ duties after midnight and finished off the evening with a mix of popular hits and underground favorites.

Just a few days later, on Oct. 23, SPIN and Musebox were at it again, this time at Brooklyn’s Union Pool with a late night showcase featuring Vancouver-based indie pop quintet Mother Mother. While they were taking a break from their current North American tour in support of their latest release, O My Heart, Mother Mother were not taking it easy. The band played nearly a dozen songs from their latest album as well as tunes from their debut LP, Touch Up. And, with their flair for cheerfully sung pessimistic lyrics and multi-dimensional harmonies Mother Mother’s sound had even the coolest kids in Brooklyn on their feet.

The Homosexuals, founded by former Rejects front man Bruno Wizard, followed the Mother Mother set with an old fashioned punk show. True to form, the band began playing sometime past 2 A.M. and sparked a requisite mosh pit for the remaining guests who dared to jump in.

Check out our pictures of the late night festivities!