Click here to find out why the rock legend tapped this Los Angeles, CA, act to open his North American tour. 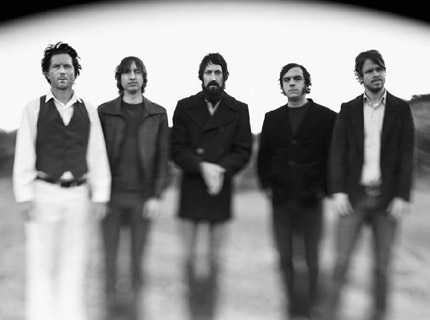 The quintet of Los Angeles vets — fronted by Russell Pollard, who has played with Sebadoh, the Folk Implosion, and the Watson Twins, among others — made their live debut in 2007 and then recorded their first record, Ghost Notes, for Neil Young’s Vapor Records in Elliott Smith’s former digs, New Monkey Studio.

From there, the band’s music landed it an opening slot on My Morning Jacket’s European tour and a few dates with Young. “Just after we’d finished recording and mixing the record, we performed at the Sundance Film Festival,” Pollard tells SPIN.com. “Neil came to the show to support us and he really loved it.” Soon, Everest were invited to open Young’s entire North American outing. “It was really surreal… the band was really honored,” Pollard says.

With the lengthy tour, which stretches well into December (click here for the full itinerary), Everest are set to reach scores of potential new followers: “Hopefully, their fans [Young and co-openers Death Cab for Cutie and Wilco] will enjoy what we do up there, buy our record, and come see us next time we’re in town.”

The tour’s stop at New York’s Madison Square Garden is still two months away, but Everest already have many fans here at SPIN HQ!