The Guide to how entertainers entertain themselves. This month: The Legendary surfer and author of the autobiography Kelly Slater: For the Love 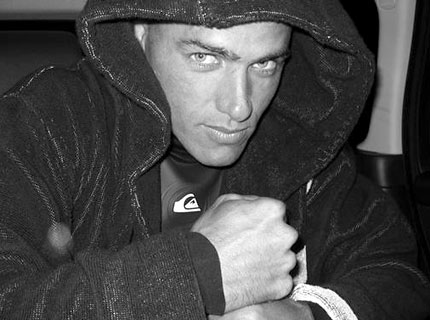 “When I was eight, my brother and I split the cost of AC/DC’s Powerage. It was prob-ably one of the last eight-track albums ever released. I don’t know how that one got past my parents, but there were no warning stickers back then. My mom was like, ‘AC/DC? Oh, right, that’s some kind of electrical current.’ “”I grew up in Florida, so I didn’t really have a baseball team to root for, but I was a fan of the Houston Astros. I was at a game one time and my brother caught a pop fly. He was holding it out like ‘Oh, I caught it!’ when this older girl stole it and went running off. My dad grabbed her by the hair, took the ball out of her hand, and gave it back to my brother.” “Jack Johnson is pretty inescapable for me. He’s a good buddy of mine. Nobody knew who he was ten years ago, and now everyone does. But it makes perfect sense, because he is a talented storyteller. I’d put Jack on the level of Bob Marley.””I enjoy whistle-blowing conspiracy films, like The Truth and Lies of 9/11, which basically explains how the Bush administration is complicit in what happened. I know it’s considered fringe, but a lot of ideas that are considered fringe are just a case of wanting to know more. What is un-American about questioning things?””I was super into Ms. Pac-Man when I was a kid. I loved arcade games. The funny thing is, back then I wanted a surfing game so bad. But by the time I made my video game [Pro Surfer], I wasn’t that into them anymore. People are always challenging me: ‘I’ll play your game and I’ll kick your ass!’ I just agree with them.””Pearl Jam’s albums are a huge part of my life. I was on my first world tour in 1991, and Ten was like an anthem to my travels. If you listen to the lyrics, you realize Eddie Vedder had a real passion for the ocean and surfing. I used to host parties where my friends and I would listen to the album three, four, five times a night.” “My girlfriend and I can’t get enough of the train-wreck reality shows, like Flavor of Love. On one episode, this girl had to go to the bathroom and she never said anything, so she took a squat and pooped on the floor. It was the most incredible thing I’ve ever seen on TV.” “Juno was pretty cool, although a lot of people loved the soundtrack and it bugged the shit out of me. I fast-forwarded a few times to get past that Moldy Peaches song [‘Anyone Else but You’]. But it’s such a great story about a girl who’s totally thinking for herself.”