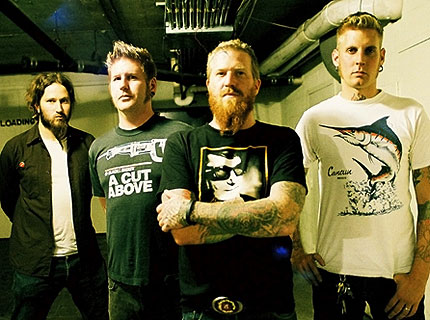 It appears frontman Brent Hinds’ injured head has healed just fine, as his heavy metal band Mastodon have finally emerged from the studio and unveiled details for their fourth album, Crack The Skye, which will be released early next year.

As the follow-up to 2006’s Blood Mountain, Crack The Skye will run 50 minutes but feature only seven tracks, built around four-part centerpiece “The Czar,” which explores the album’s lyrical theme, Czarist Russia. (We’re not making that up.)

The band recorded the album in their hometown of Atlanta at Southern Tracks Studios under the guidance of producer Brendan O’Brien (Bruce Springsteen, AC/DC, Rage Against the Machine).

After Mastodon’s Crack The Skye is finally released, the quartet will head out on a European summer tour with metal gods Metallica. Click here to check out the first batch of dates.