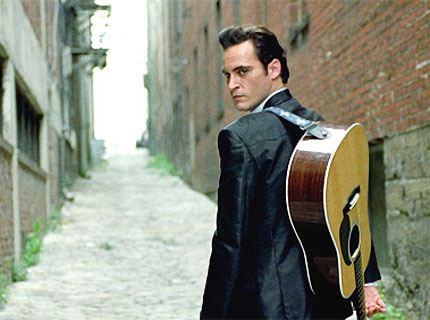 Attention Led Zeppelin: We hear you’re in the market for a new frontman and we have a lovely Johnny Cash-like singer you just might be interested in. That’s right: Joaquin Phoenix, the man who so winningly portrayed the Man In Black in Walk the Line, is calling it quits on his acting career in order to pursue his musical ambitions. Seriously.

Working the red carpet at the Paul Newman benefit in San Francisco, Phoenix broke the news to Extra. “I’m not doing films anymore,” he said. “I’m working on my music. I’m done. I’ve been through that.”

Ever the trusty sidekick, Casey Affleck was on hand to support the legitimacy of the claim. “I don’t think he’s kidding,” he said. “He’s got music and stuff.”

More on this “music and stuff”: The ex-actor’s band is called the Lady is a Tramp and also features Antony Langdon, formerly of Spacehog. According to a MySpace post, it seems Spacehog is also eyeing a reunion (who next, Jackson 5?). In light of the inevitable increase in demand for Langdon’s time, some are questioning whether that might complicate Phoenix’s full-time aspirations.

The Lady is a Tramp’s debut album is reportedly being mixed by the Charlatans’ Tim Burgess and Creation Records founder Alan McGee [via Prefixmag.com], though apparently McGee is pulling a “Phoenix” of his own, having recently announced his retirement [via NME.com].

Complicated already. Which, of course begs the question: Who will play Phoenix in the eventual biopic? We hear Robert Plant’s schedule is wide open.

Spacehog’s Antony Langdon Would Do It All Over Again