The Rilo Kiley frontwoman plays a set at famed uptown venue the Apollo with support from funny-girl Sarah Silverman. 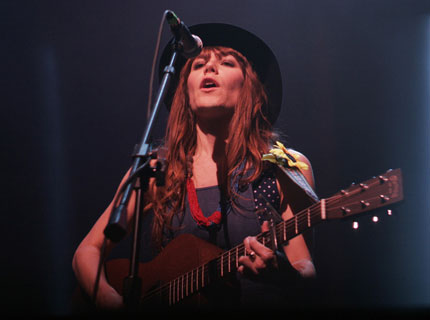 It was a night of extremes at Harlem’s Apollo Theater Saturday, as alt-country darling Jenny Lewis and potty-mouthed comedienne Sarah Silverman shared the stage. The indie rock and comic elite (including Interpol’s Carlos D and Stella actor Michael Showalter) came out for the mix of devilish humor, transcendent harmonies, and, you know, the occasional metal cover.

During the raucous opening set, Silverman covered topics ranging from sexually confused gay-bashers, removing excess body hair, and her proposed series of get well cards for women with hysterectomies. (“Sorry about your hysterectomy, but look on the bright side… more room for penises!”) But even the comic was eager to grab her seat for the headlining act. “I hope you didn’t find me too racist or disgusting!” she chirped before scampering off the stage.

Jenny Lewis’ performance was a far cry from Silverman’s raunchy monologue, but the singer kept the mood equally upbeat and playful. The former Rilo Kiley frontwoman looked every inch the bohemian “angel of Harlem” (a moniker boyfriend/guitarist Jonathan Rice bestowed upon her during the set) in a black floppy hat and polka-dotted top and high-waisted overalls. In place of her ethereal Rabbit Fur Coat cohorts, the Watson Twins, Lewis was backed by a rootsy five-piece band that helped showcase the singer’s gospel, country, and soul roots.

The soloist unveiled tunes off her new album, Acid Tongue, including the smoldering “Bad Man’s World,” the exuberant “See Fernando,” and the album’s haunting title track. And Silverman wasn’t the only performer to get laughs. Lewis’ encore cover of Nazareth’s “Love Hurts” elicited chuckles from the crowd. By the end of the night, the songstress had lived up to her heavenly title.

Check out more pictures from last night on page 2.

Ginny Yang
Tags: jenny lewis, rilo kiley, We Were There