A Halloween Tale of the Musical Macabre

Home » News » A Halloween Tale of the Musical Macabre

The following message was found flickering this morning on the computer screen of SPIN editor David Marchese.

I am nearing the end. My rope, already frayed and stretched thin, is about to break. Where once there was logic, there is now chaos. Where once I had control, I have now become a slave. Summoning the strength to update my Twitter and my Facebook status has transformed into a Sisyphean task. There is but one reason for my descent into madness: My iPod is stuck on shuffle. 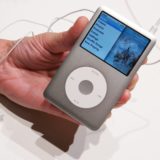 From the bowels of Hades I hear you snicker, unknown reader. But this note is not written in jest, and you would be foolish to consider this the stark raving of a madman. If only ’twere so. The wise among you would treat this note as a lighthouse beacon, cautioning you turn sail from the jagged shore of insanity. For your own good, heed this warning: Don’t trust a shady dude with creepily long pinky nails who operates an electronics “business” from the back of a noodle shop in Chinatown with modding your iPod.

I am — I was — a man of order. Strictly, some have said obsessively, I organized my music according to playlists. I had my morning-subway-ride playlist, outfitted with transportationally tasteful tunes like the New York Dolls’ “Subway” and the Cure’s “Subway Song.” I had playlists for dinner parties (T. Rex goes great with hummus, BTdubs). I carefully selected songs for working (mostly metronomic krautrock) and walking home (NIN’s “Closer” — don’t ask). I even had playlists for the seasons. Beck’s Sea Change and Bon Iver’s For Emma, Forever Ago are prime autumn albums. “Shuffle,” that willy-nilly scofflaw, may as well have been living in Serendip for all the attention I paid it.

The morning after having my iPod hotrodded, I scrolled down to my ‘Walking to the Subway — Autumn” playlist and readied myself for the warm embrace of the Cocteau Twins’ “Cherry-Colored Funk” only to be assaulted by the unexpected sound of Metallica’s “Suicide & Redemption.” What fresh hell was this? Sure, Kirk Hammett plays some face-melting solos on that track, but keeeee-rist! First thing in the morning on the way to work? Totes annoying!

In vain, I tried reselecting my painstakingly-crafted selection of songs. But the horse had run free from its bridle. Shuffle was now the rule of law. The aforementioned Metallica scorcher segued into “Gamma Ray” into R. Kelly’s “U Saved Me.” Zounds! I normally only hear that Kels chestnut when listening to my “Pop Songs Featuring Gospel Choirs” playlist. (The great underappreciated genre. See: “Man in the Mirror,” “Like A Prayer,” “I Want to Know What Love Is,” etc.)

The subway ride itself was no less fraught. Hearing the Strokes outside the Lower East Side? Blasphemy! Paula Cole anytime in public? Mad embarrassing!

Despite my frazzled countenance, I still managed to arrive at work my usual one hour early. The early bird gets the worm and whatnot. But feeling discombobulated, I figured getting in a quick 30 minutes on the elliptical might be a good idea. And I wouldn’t feel guilty about not drinking light beer the night before. Two birds, one stone, right? Anyhoo, I detoured to the local gymnasium for a pre-work sweat session. Little did I know that my workout would only succeed in exercising my crazy muscle.

I, like most people, am particular about my workout music. My warm-up phase typically consists of Kanye’s “Stronger” into Journey’s “Anyway You Want It” into the Chemical Brothers’ “Blockrocking Beats” into Iron Maiden’s “Run to the Hills.” But now, with my iPod on the fritz — Beyonce’s “Irresistable” into Danzig’s “Mother” into Chairlift’s “Bruises?” WTF? My elliptical rhythm had all the grace of Ed Grimley at a step-dancing class. Confused and sweaty, I ended my exercising early, and scurried to work, where I now write you.

I arrived at my desk to find that my work computer’s iTunes was also stuck on shuffle. Why hast thou punk’d me, great kosmic Kutcher?Was it that Southern Chicken Sandwich I ate at Mickey D’s on Yom Kippur?If so, I would’ve biggie-sized my fries. But Primus’s “Wynonna’s Big Brown Beaver” to MGMT’s “Eelectric Feel” to “Paper Planes.” What twisted ratiocination could result in that! “Love Lockdown” to “Peaches En Regalia” to “Blue Monday?” The horror! The horror! Mastodon to Madonna? There are bats in the belfry! The circus is missing its clowns! “Viva La Vida” to “Smell Yo’ Dick”? I pray for release from this Luciferian whirligig! Jeezy to Weezy? Okay, that sorta works. But still. Wajpejgwpjaergh’eirhahahahahahahahahahahaha

At this point the writing descends into jibberish. Editor David Marchese’s current whereabouts are unknown.