Blues-flecked Brits celebrate the 10th anniversary of their magnum opus, Bring It On, with an extras-packed reissue. 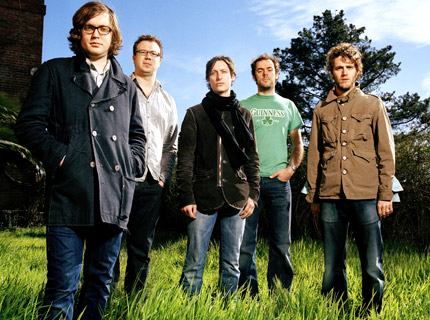 What? Originally released to rave reviews — including SPIN issuing 8 of 10 stars, calling it a “a damn beautiful album” — this adventurous Britpop quintet’s 1998 debut, Bring It On, has become a timeless entry in the ’90s Britpop oeuvre. Winning Britain’s esteemed Mercury Prize in ’98, the album — from its psychedelic, bluegrass-tinged first single, “78 Stone Wobble,” to the somber acoustics and whispers-in-a-tin-can vocals of “Tijuana Lady” — drops yet again Oct. 14 as a reissue with extra live takes and B-sides to honor its 10th anniversary. As a stepping-stone, Bring it On helped launched the band’s career, which today encapsulates five full-length albums.

Who? Formed in ’96 by frontman Ian Ball and drummer Olly Peacock — who had played together in heavy metal band Providence — before joining with Ben Ottewell (vocals, guitar), Paul Blackburn (bass), and Tom Gray (vocals, guitar, keyboards), Gomez signed with Virgin offshoot Hut in ’97 on the strength of their demos — which would soon become Bring It On. Three more albums followed — including 2002’s Liquid Skin — before they were dropped by Hut in 2005. A deal with Dave Matthews’ ATO Records ensued, as did a new album, 2006’s How We Operate, their most recent as a band. Luckily for fans, singer/guitarist Ian Ball has since struck out solo; his latest collection, Who Goes There, dropped in October 2007.

Fun Fact: Even in the music world, Brits are extremely passionate about their soccer teams. Both Ball and Gomez singer/guitarist Tom Gray share a strong love for the Liverpool-based “football” team, Everton.