Frontman Jesse Hughes reveals the debauchery-ridden story behind this song off the band's ace new album, Heart On. 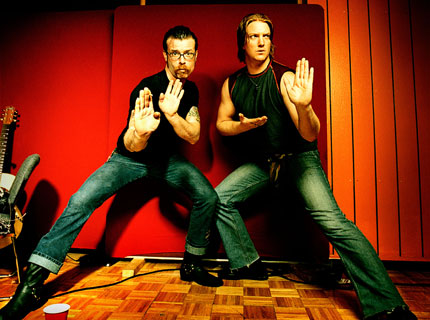 “Heart On is about our love affair with L.A.,” Jesse Hughes, guitarist/vocalist of Eagles of Death Metal, tells SPIN.com of his and drummer Josh Homme’s (Queens of the Stone Age) forthcoming album of hard-chugging party-time cuts. “Every song is almost like a storybook.” Amongst the chapters: “Secret Plans,” a power-chord tune about a run-in with a Hollywood drug dealer.

“A very weird and high-ranking dealer in L.A. had me over one night,” Hughes explains of the song’s birth. “He told me about this rad stuff he had, and when I got there I said, ‘Yeah, but I don’t see it. What’s up?’ Later I went to Josh’s [Homme] house and sat down and wrote the lyric ‘I want it/But I don’t see it.’ Boom. That’s how songs write themselves, you know? I’m shameless… I’ll take it from anything.”

Stream the song below, then offer your thoughts on its sound and lyrics in the comment section below.