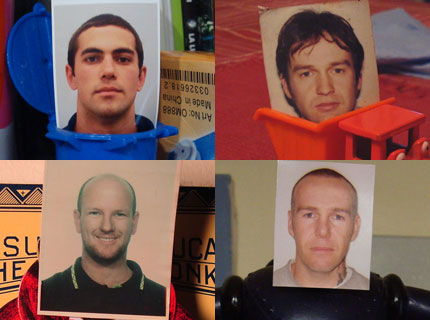 What? Repeatedly touted as Melbourne’s best live rock band, Eddy Current Suppression Ring play a brand of punk thick in Australian accents and rife with attitude. On their latest LP, Primary Colours, the Ring sport an obvious appreciation for all things basic, beholding the proud punk tradition of shredding power-chords and fiery commonplace lyrics in the vein of Black Flag and X. Finding fury in the mundane, the band riffs on workingman themes of scrounging savings and indulging in TV and ice cream, while maintaining showmen’s bombast on tunes such as the calamitous “Which Way to Go.”

Who? Formed after a drunken jam session at a Christmas party in 2003, the four motley musicians — then all laborers at a local vinyl pressing plant — wear their lack of musical expertise like a badge of honor. Lead snarler Brendan Suppression, who had never written a song before improvising that night, is flanked by guitarist Eddy Current, bassist Rob Solid, and drummer Danny Current. The quartet, who’s 2006 self-titled debut — plus three 7″ singles — were printed by their Corduroy Records employers, have started their own label, Aarght! Records, under which they released this year’s Primary Colours in Australia. Colours arrived stateside September 9 via Goner Records

Fun Fact: Considering his wild antics, most would never guess lead singer Brendan Suppression, a.k.a. Brendan Huntley, suffers from a near-debilitating stage fright. His solution? A pair black golf gloves, which he always sports when performing for peace of mind.