After years away from the spotlight, the neo-soul crooner drops a new tune. Click here for details! 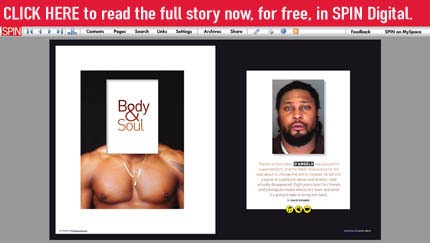 In SPIN’s August issue, we explored the tumultuous career of neo-soul singer D’Angelo, detailing his disappearance from the limelight because of drug and alcohol problems, while remaining uncertain about the fate of the struggling soulman’s new tunes. Now D’Angelo is back with a remake of his 1996 song “I Found My Smile Again,” available now exclusively via iTunes.

As a lead-up to his long-awaited third album, tentatively due next spring, the song — originally featured on the soundtrack for the movie Space Jam — arrives after D’Angelo’s recent collaborated with Q-Tip on the track “I Believe.” According to Billboard.com, D’Angelo is currently hard at work in a Los Angeles studio on his forthcoming follow-up to 2000’s Voodoo, which is said to feature the Roots’ ?uestlove, retro-soul singer Raphael Saadiq, and jazz great Roy Hargrove.