With their debut album, Alight of Night, these brooding New York rockers separate themselves from the pack. 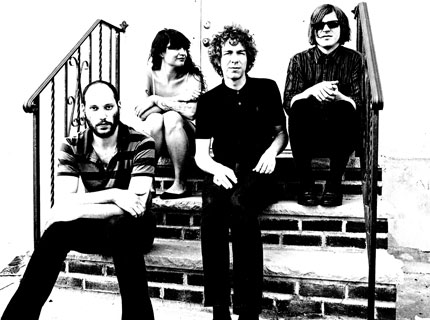 What? No, they don’t blast terrorizing 8-bit electro-clash beats while screaming nonsensically — that’d be Crystal Castles. And their drummer doesn’t go by the nom de plume “Sexual Chocolate” — think Crystal Antlers. Instead, Brooklyn, NY’s Crystal Stilts marry the garage-rock and alt-pop aesthetic of New Zealand’s late and eternally unappreciated the Chills with the gloriously gloomy moan of Joy Division’s Ian Curtis in a sound both lo-fi obsessives and file-sharing fetishists can attend. The group’s debut full-lentgh, Alight of Night (out Oct. 28), is lined with tunes that shine and glimmer (“Shattered Shine,” “Prismatic Room”), even as other tracks stare menacingly into the darkness (“The Dazzled,” “The Sinking”).

Who? Crystal Stilts were founded in New York in 2003 by Brad Hargett and JB Townshend. Soon the band — still just a duo — recorded their debut single, “Shattered Shine,” with Sean Mafucci (Gang Gang Dance, Kid Congo Powers) and then toured with numerous acts, from Blood on the Wall to the now defunct Brit rockers the Long Blondes. Over the past two years, Hargett and Townshend added Kyle Forrester on keyboards and Andy Adler on bass, while writing Alight of Night, which is Crystal Stilts’ second release of this year — following a self-titled EP — and the band’s first with former Vivian Girls drummer, Frankie Rose.