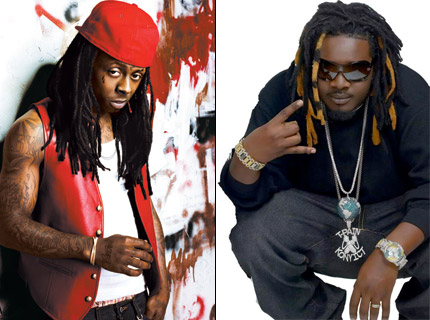 Was it murder on the red carpet that snagged rapper/producer T-Pain hosting duties at this year’s BET Hip-Hop Awards, held Saturday night in Atlanta? Though rumors about a pre-show arrest or a riff with BET’s upper management circulated as possible explanations for the last-minute switch in emcees (comedian Katt Williams was due to host the event for the third year in a row), the word from BET’s P.O.V. blog is that the switch came by way of a dance-off — a break-dance-off no less [via Allhiphop.com].

“So we were all hanging out last night and Katt bets T-Pain couldn’t beat him in a break-dance battle,” BET’s Executive Vice President Stephen Hill was quoted as saying. “Not knowing T-Pain was an extremely DOPE break-dancer, Katt thought it was an easy win. T-Pain said if I win, I get to host the Hip-Hop Awards.”

The replacement emcee wasn’t the only surprise of the evening: Lil Wayne revealed he’s expecting his first “Lil one” very soon, saying: “I got a son about to be born any day now.” Wayne, nominated for 12 awards, was named Lyricist of the Year, MVP of the Year, and the Alltel Wireless People’s Champ.

Other winners included DJ Khaled, Young Jeezy, Ludacris, and Busta Rhymes. LL Cool J presented Russell Simmons with the I Am Hip-Hop Award, given to artists that have made notable contributions to the hip-hop community. The performances, however, stole the show with appearances from Nas, T-Pain, T.I., N.E.R.D., Common, Nelly, and Rick Ross, among others.

The awards ceremony was taped Saturday night and will broadcast on BET Thursday at 8 P.M.