Beastie Boys Announce “Get Out and Vote” Shows

Will the New York hip-hop crew support Obama in your hometown? Click here for details! 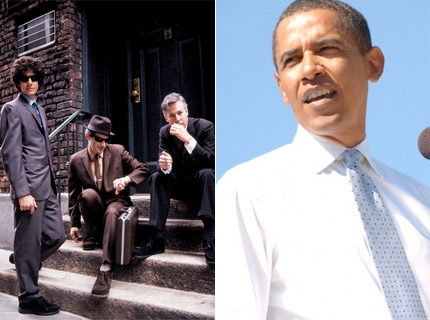 As Election Day approaches, many musicians are stepping up efforts to rally voters to the polls come November 4. The latest to vote with their instruments?Hip-hop luminaries the Beastie Boys, staunch Obama supporters who just unveiled a handful of “Get Out and Vote” shows.

“This election is too important to stay at home,” the rap trio told Billboard.com. “We hope that you can come out, have a nice night, dance,sing, get your freak on, and then wake up the next morning and geteveryone that you possibly can to get out and vote.”

The mini-tour — set to hit three swing states decisive to the election — kicks off October 28 in Richmond, VA, and is followed by shows in St. Paul, MN, and Milwaukee, WI, Nov. 1-2, respectively. The shows will also feature performances by such artists as Norah Jones, Sheryl Crow, Santogold, Ben Harper, and Tenacious D.