Obama supporters gather in Brooklyn to rally around their favorite candidate. 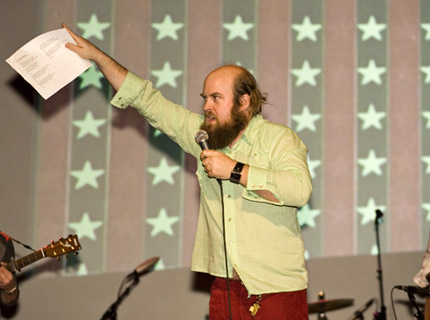 “I just hope you invite us back for the victory party!” said Franz Ferdinand’s Alex Kapranos at Tuesday night’s Barack Rock benefit show at Brooklyn’s Music Hall of Williamsburg. And as evidenced by the evening’s general ebullience, Obama’s Brooklyn contingency expect to have reason to plan that celebratory bash.

Headlined by multi-instrumentalist and whistling-guru Andrew Bird, and featuring sets from Franz Ferdinand, Les Savy Fav, Guster, and the Fiery Furnaces, the sold-out benefit ran the gamut of entertainment. Revelers enjoyed a showcase of live music, stand-up comedy, and even a separate lounge to view the evening’s Presidential debate. While faithfuls crowded around to watch the two candidates duke it out, acts like Adira Amram & the Experience and comedian John Roberts warmed the stage with amusing antics and gust-busting performances.

Les Savy Fav stripped down their set to a folksy affair, leading the crowd in a sing along of Woody Guthrie’s “This Land Is Your Land” and the Monkees’ “Steppin’ Stone.” A sunny and warm set from Guster saw the audience hoot and holler through the band’s debut of several new songs. And later, guitarist Joe Pisapia plucked out a solo during fan-favorite “The Captain.”After a few Sarah Palin jabs by comedian Josh Hamilton, the Fiery Furnaces took to the stage for a three-song set of jaunty funk, blues, and psychedelia.

Though hardly a “surprise guest” by the time they took the stage, Franz Ferdinand, sans their signature dapper duds, gave a raucous rendition of hits “Take Me Out” and “Matinee” while clips of ’80s flicks Wall Street, Flashdance, and Rocky IV hit the screen behind them. Delivering crisp vocals and guitar licks over hard, danceable beats, Franz’s set proved the most polished of the night.

Then Andrew Bird arrived. He strutted through a haunting rendition of “A Nervous Tic Motion of the Head to the Left” before diving into “Fake Palindromes,” which got everyone dancing to the one-two punch of the drums. The encore, highlighted by the violin plucks of “Some of These Days,” closed out the show, which certainly gave fans hope for the future of 1600 Pennsylvania Avenue.