Free downloads! Hear SPIN.com's top CMJ discoveries without leaving the comfort of your own home. 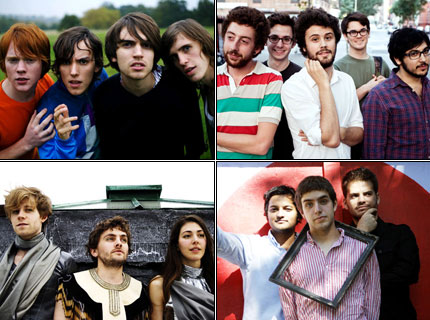 New York’s annual smorgasbord of new music — the CMJ Music Marathon — is here (Oct. 21-26), bringing hopeful bands to this fair hamlet’s varied venues in ungodly numbers of 15-passenger vans. To save you the work, we’ve sorted through dozens of MP3s and MySpace pages, identifying the hot-sounding talents you might not have heard before. Get our nine top picks (arranged alphabetically below) onto your playlists PRONTO! as you prepare to hear lots more from them in 2009.

Hometown: Brisbane, Australia
Recommended if you like… Belly, Tegan and Sara, Throwing Muses
Why it rocks: Long live the power duo (and grammar be damned)! Armed simply with guitar and drums, this Aussie girl-boy duo spent the spring opening for Tegan and Sara, the latter of whom helped An Horse secure a U.S. record deal. That album will emerge in 2009, but the Not Really Scared EP, out now, contains two of the band’s best, “Company” and “Postcards,” which you can stream here.
Stream: “Postcards”

Hometown: Brooklyn, NY (via Boulder, CO)
Recommended if you like… The Knife, CSS, Thompson Twins
Why it rocks: Bedroom synth pop is back — thanks, MGMT! — and Chairlift appear poised to be the next Facebook-friendly college kids to tear up the scene. And they’ve got a big head start: Their track “Bruises” got picked for a recent iPod nano TV commercial.
Download: “Evident Utensil”

Hometown: Boston (via Chicago)
Recommended if you like… Violent Femmes, Clap Your Hands Say Yeah, Ryan Adams
Why it rocks: Normally, the term “singer/songwriter” is an instant turn off, mainly because too many of those people write innately boring, narcissistic music. Not so with Ezra. Well, at least in regards to the former complaint: His recordings are urgent, danceable, and just barely restrained, which leads us to believe his live shows will be totally enthralling.
Download: “We Should Fight”

Late of the Pier

Hometown: Nottingham, UK
Recommended if you like… Klaxons, Hot Chip, Datarock
Why it rocks: This new rave quartet is gleefully unafraid of mixing up their sonic palate on the forthcoming debut, Fantasy Black Channel, from frenetic electro pop to disco punk to future funk. NME, who recently put these lads on their cover, called their live show “a living, breathing sci-fi comic book adventure, proof that a gig can be anything.” We’re just hoping that it’s something.
Download: “The Bears Are Coming (Emperor Machine Remix)”

Hometown: New York City
Recommended if you like… The Pretenders, Liz Phair, the Cars
Why it rocks: You’ll listen to “Self-Taught Learner” (below) and swear it has to be at least 25 years old. Trullie’s husky delivery and this version’s scratchy, analog-sounding production give the tune a timeless, downtown NYC essence that’s only amplified by Lissy’s “Factory girl” looks.
Download: “Self-Taught Learner”

Hometown: Phoenix, AZ
Recommended if you like… Fountains of Wayne (pre-“Stacy’s Mom”), the Shins, Weezer
Why it rocks: Clever, intelligent pop songs come in bunches from this budding outfit, particularly the unshakable “Cannibal Queen,” available here as a download. Although, if they were to, you know, get famous, they might regret a line from the song’s first verse: “I’m no longer on a quest to get girls undressed.”
Download: “Cannibal Queen”

Hometown: Cambridge, MA
Recommended if you like… MGMT, Girl Talk
Why it rocks: The chatter around Passion Pit reminds us a bit of how people were talking about MGMT a year ago. And while these new fellas have a much weirder repertoire than our current magazine cover subjects, it still packs that same dancefloor wallop for both scenesters and casual observers.
Download: “Sleepyhead”

Hometown: New York/Boston
Recommended if you like… Mates of State, the Submarines, the Cardigans
Why it rocks: With all of the synthesizer kids and spazzy indie bands on the scene, it’s refreshing to delve into something a little deeper, in this case the cozy songwriting and distinctly grown-up sounds of Via Audio. Restrained and elegant, Via Audio feels more Grey’s Anatomy than Gossip Girl, and that feels just fine to us.
Download: “Developing Active People”

Hometown: West London, UK
Recommended if you like… The Killers, Echo & the Bunnymen
Why it rocks: Since the Killers are, well, fucking massive in the UK, it was only a matter of time before a band like White Lies emerged. And while Brandon Flowers sings about things we can’t truly wrap our heads around — “Are we human? Are we dancer?” Are we missing the joke? — these young Britons are out Killers-ing him, crafting the epic popscapes that endeared us to those weird Las Vegans in the first place. P.S., We’re staying tuned for a British-born version of Kings of Leon.
Stream: “Death”