Oh, it's different from their last release, that's for sure. Click here to read all about it! 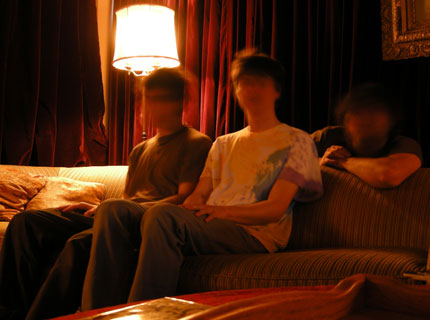 1. Your stereo system — and your headphones — are going to receive quite the workout. Merriweather is extremely bass-heavy and has traces of techno throughout its 11 tracks, especially on the more joyous songs “My Girls” and “Brothersport.” But don’t outfit your car with subwoofers just yet — Animal Collective have loaded the record with a barrage of high-pitched samples, including those found on “Summertime Clothes” and the serene and lovely ballad “Bluish.”

2. Vampire Weekend aren’t the only ones who listen to Paul Simon. The Afro-pop rhythms of “Lion In A Coma” and “Brothersport” are direct descendents of Simon’s 1986 classic Graceland. And the wavering vocal melody of opener “In The Flowers” sounds like it would be right at home on the legendary singer-songwriter’s 1972 self-titled debut, you know, with some zany alterations, of course.

3. Collaboration is the root of inspiration. If last year’s Animal Collective album Strawberry Jam left some feeling confused, it was partially due to its split-personality — Avey Tare’s (a.k.a. David Porter) shouts and yelps were somewhat mismatched against Panda Bear’s (a.k.a. Noah Lennox) meditative hymns. Luckily, Merriweather Post Pavilion feels much more coherent. Take, for example, the group vocal harmonies found in tracks like “Also Frightened” and “No More Runnin.”

4. Merriweather Post Pavilion is not Panda Bear’s solo record. The members of Animal Collective that had a hand in making this record — Avey Tare, Panda Bear, and Geologist (a.k.a. Brian Weitz) — have said that they drew inspiration from last year’s gorgeous solo effort from Panda Bear, Person Pitch. While Merriweather clearly takes notes from that album’s sampling and tropical grooves, it’s not the unified statement about love, loss, and depression that Person Pitch represents. Instead, the record represents a range of emotions, from the philosophical sermonizing of “My Girls” to the corporeal musings of “Taste.”

5. Expect the unexpected. The lush sounds of Merriweather Post Pavilion strongly contrasts with the tension of Strawberry Jam… just as Strawberry Jam was a departure from the band’s 2005 set, Feels, and Feels was a departure from — well, you get the idea.Animal Collective have changed their style with every album, and Merriweather is no different. And one thing is certain: A year from now, they’ll have moved on to something completely different again.