Thomas Kelly and his rip-roaring backing trio bust out a barrage of sweaty riffs and win over skeptics. 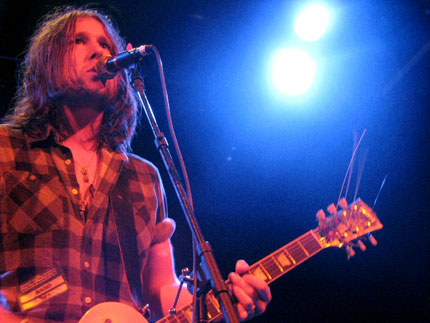 Nary a word was spoken from the stage throughout TK Webb & the Visions’ set last night at Manhattan’s Bowery Ballroom, probably because only full-force, raspy screams could even begin to compete with the growling distortion of the band’s two guitar assault. And so the Brooklyn-based Webb skipped the small talk in favor of hell-raising howls on 10 scorchers.

Sandwiched between Swedish hard rock acts Graveyard and Witchcraft, Webb and the boys cherished the home field advantage, sauntering onto the stage with unkempt hair and flannel sleeves rolled up, leaving no doubt that even those expecting Nordic doom would be floored by both the band’s sound and swagger.

Drawing almost entirely from the sludgy blues of the group’s debut album, Ancestor, the searing set pushed onward with punishing drums. Yet it was the six-strings that took center stage, notably with the dueling solos of “Closed Captioned Slang” and the sleazy ’70s licks of “Hope You Are All Gone.” The mostly male crowd, perhaps once skeptical that these Yankees could match up to the Swedes, stared in awe as effects pedal swells washed over them in a moment of eureka.

Joseph Coscarelli
Tags: TK Webb and the Visions, We Were There