TK Webb and the Visions

The Brooklyn bluesman gets loud on his third record and first with the newly formed Visions. 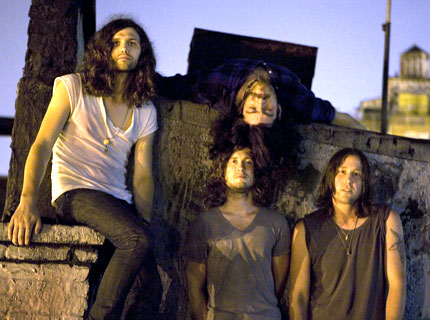 What? With their 2005 debut, countrified-rock outfit Magnolia Electric Co. asked a mind-boggling question: “What comes after the blues?” Three years later, Brooklyn-based troubadour TK Webb has found the answer, and it’s pretty heavy, man. With his newly formed backing band, the Visions — featuring ex-members of Blood on the Wall and Love as Laughter — Webb returns this week with the riff-tastic Ancestor. A drastic departure from the stark, howling blues perversions of Webb’s 2006 solo outing, Phantom Parade, Ancestor owes more to Robert Plant than it does to Robert Johnson, with astral sonic projections, mystical lyrics, and ’70s-hard-rock-indebted guitar play that will have you hopping misty mountain tops from the moment the needle drops.

Who? Born Thomas Kelly Webb in 1977 in Missouri, Webb released his debut, KCK (short for Kansas City, KS), in 2005 on Brooklyn’s eclectic Social Registry label. After its follow-up, Phantom Parade, dropped to widespread critical recognition the following year, TK formed the Visions in the summer of 2007. Ancestor is the group’s debut and first record on new label home Kemado. The Visions are made up of Webb (vocals/guitars), Brian Hale (guitars), Ben McConnell (drums), and Jordan Gable (bass).

Fun Fact: Webb, who picked up the guitar at age 9, played with numerous bands before going the solo route on his debut full-length. But with the Visions, the singer/songwriter feels right at home. “It felt like gravity pulling the sound towards being bigger,” Webb says of working with the new group. “I found myself surrounded by bland half-baked folk acts and wanted out… but this project feels right. It feels like a band should.”