Watch her perform "His Love" with the Running With Scissors author seated beside her onstage. 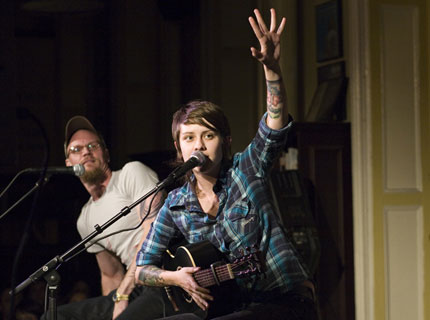 Performing for just the third time ever without her sister, Sara, Tegan Quin shared the stage last night at New York’s Housing Works Bookstore Café with author Augusten Burroughs (Running With Scissors).During the sold-out charity event, Quin played “His Love,” a song she wrote for the audiobook version of Burroughs’ latest novel, A Wolf at the Table, for the first time in front of a live audience.

Quin and Burroughs bantered back and forth about the genesis of the song, the lyrics of which developed out of the letter she was writing to him. “What was amazing to me that it was to me,” Burroughs said onstage about his reaction to receiving Tegan’s song via email and playing it for the first time. “It was so profoundly empathetic. I lost it. It was beautiful. It was so incredibly generous of you.” Then she performed a solo acoustic rendition of the track, the original version of which appears on both the audiobook and Burroughs’ website.

The Quin-Burroughs pairing was part of SPIN.com’s inaugural Liner Notes event — a celebration of the intersection of music and literature — and featured performances by Circa Survive’s Colin Frangicetto, Elizabeth Seward, and Anberlin’s Stephen Christian. The more than $8,000 raised from ticket and merchandise sales for the event benefited Housing Works, a non-profit that strives to ensure that homeless and low-income people living with HIV/AIDS and their families have adequate housing, food, social support, drug treatment, health care, and employment.

SPIN.com will be posting video of the entire show soon, but for right now, enjoy Tegan’s “His Love.”