Will arena-ready melodies catapult the Welsh trio out of relative obscurity in America? 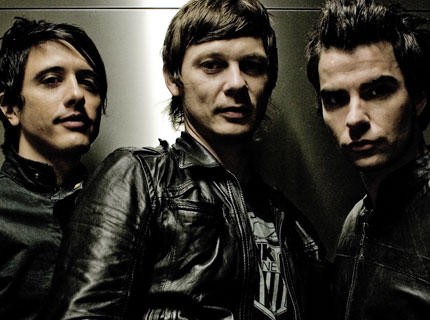 What? Over the last decade, Welsh Britpop outfit Stereophonics have churned out reliably stomping rockers with big-hearted choruses to the delight of their fervent U.K. fanbase. However, save their minor radio hit “Dakota” in 2005, they haven’t found comparable stateside success. With the U.S. release of Stereophonics’ sixth outing, Pull the Pin (out for nearly a year already abroad), frontman Kelly Jones and crew could change their foreign fortunes: Pull the Pin is jam-packed with the group’s trademark grunge-y guitars, whiskey-soaked vocals, and arena-ready melodies sure to please soft-hearted Snow Patrol fans and pub-brawlin’ Oasis obsessives alike. For proof, download the roaring “My Friends” below.

Who? Singer/songwriter/guitarist Kelly Jones and bassist Richard Jones (no relation) began writing music together in 1992 under the alias Tragic Love Company — a combo-homage to influences Tragically Hip, Mother Love Bone, and Bad Company — before changing their name to Stereophonics. The group signed to Richard Branson’s now-defunct V2 Records in 1996, releasing their debut, Word Gets Around, the following year. Stereophonics released six commercially successful full-lengths through V2 before the label’s collapse; currently, the band is comprised of Kelly and Richard Jones, Javier Weyler (drums/percussion), and touring member Adam Zindani (lead guitar).

Fun Fact: Stereophonics originally considered calling themselves Blind Faith, until they learned that a little-known guitarist named Eric Clapton had previously been in a band with the same name.