Check out video of our picks of the best local acts ripping it up at the recent Bumbershoot festival. 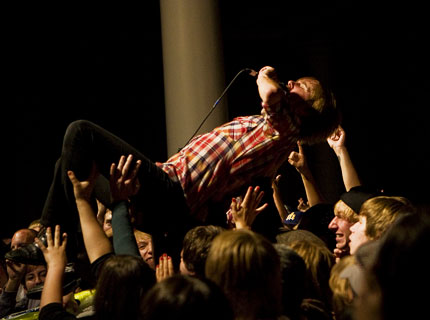 One the best parts of traveling from festival to festival all summer long is the chance to sample the local fare. And not even counting the fresh salmon and tasty micro brews, Seattle’s Bumbershoot certainly tops the list — featuring a lineup steeped in hometown bands, many of which surprised us with their talent, ferocity, and distinct sound. We’ve sifted through the many up-and-coming Seattle bands we saw to bring you our picks of the Top 5 from Bumbershoot 2008 in descending order of awesomeness. Watch their SPIN.com performance video below.5. Mono in VCF, “The Only One”
With cinematic sounds a la Scott Walker, this spacey soundscape outfit blur the line between down-tempo trip-hop, swaying ’60s-era soul, and psychedelic Britpop with crafty methodology, ethereal guitars, and frontwoman Kim Miller’s soft-touch pipes. Though lyrically a little shallow, the band’s sleepy slow-dive sound is certainly eyebrow-raising.4. These Arms Are Snakes, “Horse Girl”
These post-hardcore spazzouts — formed from the ashes of Botch, Kill Sadie, and other relatively renowned underground acts — have developed a cult following with their progressive, angular, and dynamic explosion of angsty screams and turned-up-to-11, otherworldly sounds. A local favorite.3. Thee Emergency, “Heartbreaker”
R&B, soul, and experimental rock group Thee Emergency are led by frontwoman Dita Vox, whose deep croons ride atop piping organs, sliding guitars, and psych-rock drumming. Thee Emergency’s live set — a sweaty, energetic mess — is not to be missed.2. The Girls, “Dope Disguised as Nuns”
With members of many now defunct Seattle punk bands, including the Briefs, the Spits, and the Catheters, Dirtnap Records quintet the Girls charmed with skuzzy riffs, fluxing synths, and anthem-filling sing-alongs. If you like the Dirtnap sound — brash and catchy (Exploding Hearts, the Epoxies) — the Girls are the latest torch bearers.1. Arthur & Yu, “There Are Too Many Birds”
Breathing life into their excellent debut record, In Camera, this folk-tinged boy/girl duo — a recent addition Sub Pop offshoot Hardly Art’s roster — blew us away with their live set full of layered pastoral harmonies, lyrical poignancy, and floating melodies — easily snagging the Bumbershoot ’08 crown as best local band.