What we learned this week: Kurt Cobain was a Metallica fan. Ben Folds has plenty of free time. Weezer are talented and quirky. And more. 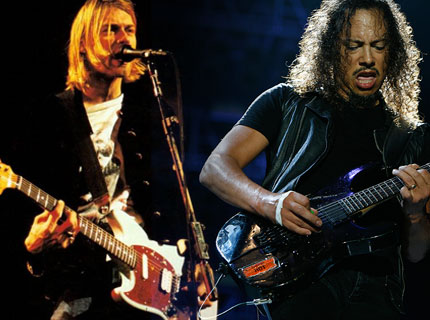 It’s time for the Presidential debates, but here at SPIN.com we’re too busy rocking out to argue about politics — and with a week like this one, who could debate that? We’ve seen My Bloody Valentine’s long-promised reunion, witnessed Weezer’s electrifying tour-opener, and heard a sweet tune or two. Check out this week’s highlights below.

What we learned about Kurt Cobain’s meeting with Metallica’s Kirk Hammett: If the Nirvana frontman was alive today, he’d probably like ‘Death Magnetic’ — but ‘Ride the Lightning’ would remain his favorite. Click here to watch an exclusive clip of the Metallica guitarist talking about a true meeting of musical minds.

What we learned from Weezer’s tour-opening gig: The Los Angeles-based power-pop quartet have tunes and quirkiness for days. Click here to see pictures and read a review of the band’s performance in Lowell, Mass.

— Exclusive Copeland Stream: “On the Safest Ledge” Frontman Aaron Marsh tells SPIN.com the meaning of this lilting tune off the band’s forthcoming new album.
– My Bloody Valentine Reunite in NYC! Cover your eyes and ears, these Irish noise masters wage war on the senses for fans new and old.
– DJ AM, Travis Barker Expected to Recover from Plane Crash Injuries But four others died in the South Carolina wreck.
– Kid Rock Wows Fans in L.A.! See photos!The American badass gives his audience an explosive performance of genre-defying tunes.
– TV on the Radio, Dear Science (Interscope) Is this the album of the year? Click to find out!
– The SPIN Interview: Noel Gallagher He may not be Oasis’ frontman — that’d be his little brother Liam — but Noel Gallagher has never been afraid to shoot off his mouth. “Ten years ago we told everyone with a mic we were the greatest thing ever,” he says. “Now we just quietly believe it.”