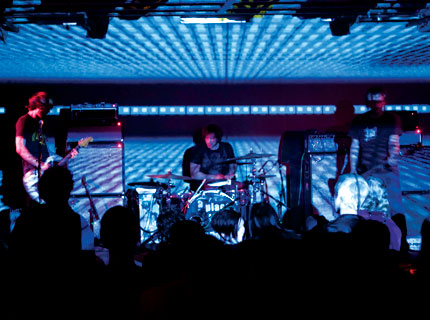 Like a menacing wave, Brooklyn noisemakers A Place to Bury Strangers washed into Portland’s Doug Fir Lounge Saturday night and won over a small but devoted audience of goths and post-punkers with an impressive combination of mangled, industrial-grade sounds and visually arresting, black-and-white video clips projected against the club’s backdrop.

Taking the stage shortly after 11:00 P.M., lead Stranger Oliver Ackermann offered words of praise for the evening’s opening act, Portland’s own goth-pop outfit the Prids. From there, APTBS finessed their way through a pair of early cuts before finding stride in “To Fix the Gash in Your Head,” an ear-rattling joint culled — as much of the set was — from the group’s 2007 eponymous debut. Successive jams like “Missing You” and “I Know I’ll See You” only raised the show’s sonic intensity to more depraved levels.

The band, which has won serious accolades for its uncompromising volume, velocity, and vision, strayed somewhat from the clean quality of their recordings, notably with Ackermann’s melodic vocals, which floated in a gauzy web of pedal effects, guitar squall, and oscillating white noise.

Having spent time on the road this year with like-minded acts such as Black Rebel Motorcycle Club and Nine Inch Nails, APTBS has learned to execute its live show with a high level of proficiency and quiet confidence. APTBS brought the night to a close with an inspired and extended rave-up that climaxed with a choreographed barrage of strobe lights and fog machines. Left in a dazed and disoriented state, some concertgoers ran for the exits, while survivors made way to the merch table, eager to trade their hard earned cash for sonic gold.

Travis Greenwood
Tags: a place to bury strangers, We Were There