Of Montreal: Welcome to Normal Town

With unlimited imagination and the resources to realize his weirdest whim, Of Montreal's gender- (and genre-) bending, secretly sane visionary is learning to have his cake and eat it, too. 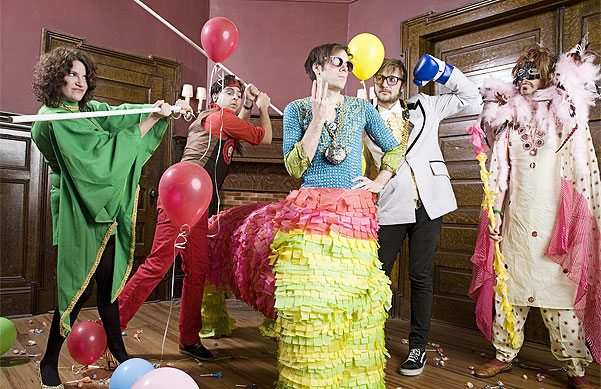 For an impish sprite with a wardrobe full of starry aqua ankle boots and fishnet tights, Kevin Barnes is surprisingly intense when it comes to volleyball. It’s a numbing summer night in Athens, Georgia, and we’re engaged in some serious business in Normaltown, the larky boho haven that Barnes calls home. His backyard is strewn with tangles of Christmas lights, and his friends — the tight coterie of musicians, painters, and various weirdo visionaries who help make Of Montreal more than just a band — have split into gamely warring factions. “I’ve seen him rip off his shirt in anger for losing,” says Of Montreal drummer and multi-instrumentalist Jamey Huggins. Keyboardist Dottie Alexander describes playing against Barnes as “a real catharsis.”

The attic in the house up front is where Barnes has worked on a series of increasingly ambitious art-rock masterpieces, including Of Montreal’s ninth album, Skeletal Lamping. But it’s out here, in the yard past the trampoline and a kiddie pool, where Barnes, 34, and his band function like a true unit. The group just treated itself to a new piece of equipment: a shiny pink volleyball to replace a leaky old one wrapped with what bassist Davey Pierce describes as “20 pounds of duct tape.” (They tried.) The grass around the net is littered with melted Cherry Garcia cones and empty beer cans. By any sporting measure, the level of play is unmistakably low. But the spirit! Bodies lurch and dive feverishly. Absurdist trash-talk zings over the net like so many feeble slams: “We need to get you finger extensions!” “What would Jackie Joyner-Kersee do?”

Barnes himself is commanding but relatively quiet. Between points, he riffs on the allure of Aerosmith and tells of a dream in which a bandmate appeared before him with a disarmingly small penis and six swinging testicles. (That would be Ahmed Gallab, a newly enlisted supplemental drummer, not yet in town to be freaked out.) But the Kevin Barnes diving after wobbly shots with an incongruously focused look is a long way from the upstart star who preens onstage amid a mess of cuddly winged monsters.

Of Montreal’s practice space is in a complex of repurposed warehouses between a chicken-processing plant and a cement factory, under a rusty water tower on which hobo is graffitied in a shaky hand. A trapeze studio and a bike shop do business among art spaces and rooms made noisy by dozens of bands. They rent two large rooms: one for music and another to build props and sets for their famously elaborate stage shows. The music room boasts a guitar amp draped in pink fur and a chandelier attached to a pulley, built on a whim to raise and lower for the lighting of wax candles.

The prop room nearby houses the fixtures that make Of Montreal come alive onstage. A wooden box swathed in brightly colored paint serves as a makeshift coffin from which Barnes can spring forth as a ghostly white blob, covered with the contents of 30 cans of shaving cream.

“Over here we’re building leaf-blower guns,” says Nick Gould, who started designing sets and props for Of Montreal as a recovering film-school student and dates keyboardist Alexander. Components of a dazzling stage set stack up high against a wall, with luminescent risers and a catwalk suspended in between. In concert they flash in stroboscopic patterns like something from Ziggy Stardust’s yard sale. In storage they’re just a bunch of plywood contraptions cobbled together and crammed with standard-issue 60-watt bulbs. “Your output is going to be exponentially more creative when you make it up as you go,” says Gould.

Of Montreal’s growing stature — 2006’s Hissing Fauna, Are You the Destroyer? sold an indie-respectable 108,000 copies worldwide — owes a lot to the ad hoc spectacles they stage, with little budget but lots of ingenuity. When they performed “Heimdalsgate Like a Promethean Curse” on Late Night With Conan O’Brien last year, Of Montreal had so many people doing so many different things on set — sword fighting, stumbling around in a ten-foot space-god suit — that union rules required them to be billed as a “performance group” rather than just a band.

Such shoestring theatricality has made them heroes to a new breed of like-minded bands. “Kevin is constantly pushing the boundaries of pop, which is inspirational to slackers like us,” says Andrew VanWyngarden of MGMT. “He’s making the Black Albums and Station to Stations of today.”

This outsize ambition has been funded in part by a handful of commercial deals, including a jingle for a certain Australian-themed steak-house franchise that has been the source of much debate in indie circles. “It’s all slightly embarrassing, a skeleton in the closet,” Barnes says. “But we put a lot of money into the shows that we might not see again. If you want to make a living making music these days, you have to have other sources of income.”

“We’re always up for an incredulous moment,” says guitarist Bryan Poole, who joined up with Barnes more than a decade ago. Back then, Barnes was a shy, awkward twentysomething from Florida with an ear for forgotten ’60s pop and a belief that indie rock could be more than glum guys in plaid shirts. Poole remembers him confessing to not having any friends until he was ten or 11, so “he had to create his own world and all these things to entertain himself.”

Barnes wasn’t alone in Athens, though. When he first moved there, he shared a house with Jeff Mangum of Neutral Milk Hotel and Will Hart and Bill Doss from Olivia Tremor Control — each a prime mover in the experimental psychedelic confab known as the Elephant 6 Recording Company. “That was just about making music for yourself and your friends,” Barnes remembers. “The scene didn’t exist that we wanted, so we just had to make it.”

Read the entire Of Montreal story in the October 2008 issue of SPIN, on newsstands now.