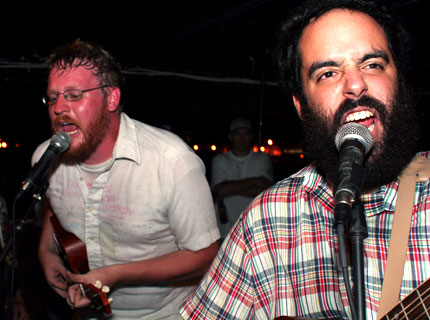 The rootsy five-piece winged it without a setlist. Leader Greg Jamie’s rambling acoustic odes of youthful indolence rocked along with the boat in the jerking waves at the feet of Lady Liberty.

Although their new album, Broken Hymns, Limbs and Skin, doesn’t arrive till October 30 (Kemado), the Budweiser-swilling faux-Southerners treated fans to a set of mostly new songs, including the excellent brooding ballad “Angeline.”

As the band lurched into “Down to Rest,” a raucous banjo ditty from 2007’s Head Home, the dancing, sweat-soaked crowd struggled to not spill onto the tiny stage. Three of the band members — Bob Pycior (fiddle), David Rogers-Berry (drums), and Newman (bass) — played with punkish urgency, while singer Jamie and multi-instrumentalist Gabe Darling injected some restraint with their influences of Appalachian mountain music.

Although there were hiccups along the way — notably Darling trying numerous times to maintain his balance while plucking his banjo and even once having to start a song over due to the rocking boat — O’Death brought a mish-mash of gypsy violin, blasting drumbeats, and down-home twang aboard this three hour tour.

Matt Kiser
Tags: o'death, We Were There