New Portugal. The Man MP3: “Lay Me Back Down”

These Alaskan indie rockers from Sarah Palin's hometown get political in their new song. 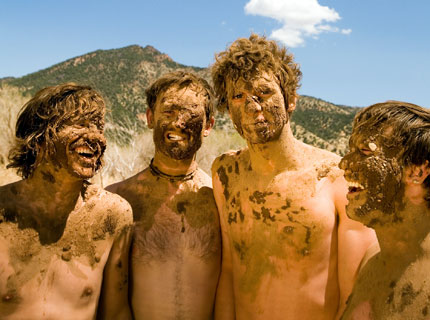 Before becoming the 2008 Republican vice presidential candidate, Alaska Governor Sarah Palin was the mayor of Wasilla, Alaska — the hometown of politically outspoken indie-prog four-piece Portugal. The Man. So is their new song political conspiracy, or excellent timing? We’ll let the band’s blissfully tangled, wide-screen psychedelic rock speak for itself.

“I remember things / Not many things / Don’t remember presidents / Or what they did,” vocalist John Gourley sneers before the band hit a dreamy, ooh-filled coda on “Lay Me Back Down,” a track off their third record, Censored Colors (out September 16). Panoramic guitar crashes and vocal sighs may tie them to like-minded acts such as Minus the Bear, and hints of cabaret-piano may recall Spoon and Cold War Kids, but it seems clear who the band’s really aiming for… or does it, Ms. Palin?

Now Hear This: Portugal. The Man, “Lay Me Back Down”