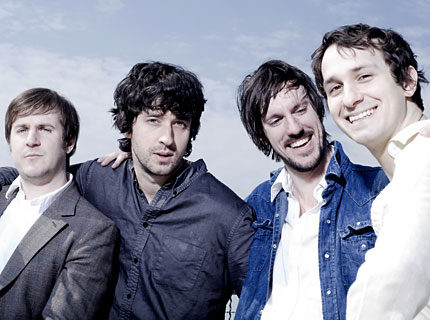 Like the Mobius Band before them, Brooklyn’s French Kicks — fresh on the heels of their SPIN-approved full-length Swimming — are diving into interesting territory with their new EP, aptly titled Covers, which is a collection of their interpretations of a few lofty tracks, including songs originally written by Lindsey Buckingham, the Ramones, and the Shirelles. Among the tracklist: “Caroline Goodbye,” a cut off One Year, 1971’s debut solo album from the Zombies’ bright crooner Colin Blunstone.

“I first heard the song five or six years ago when a friend from L.A. gave me the record,” Wise tells SPIN.com. “I found the record again recently and got back into it. It’s an over-the-top early ’70s production with strings and mellow horns, but I think we all responded to its overall wistful mood. A very simple song at the core stands up well however you arrange it, so we did this kind of lazy live take that we all liked a lot.” So do we!