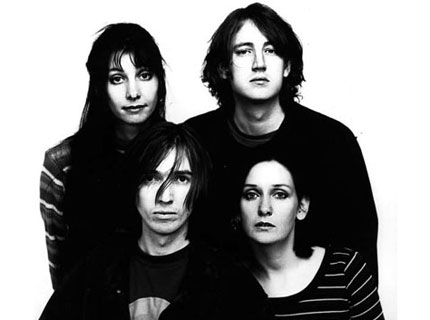 What’s the Deal? In the 16 years since shoegaze gods My Bloody Valentine graced American shores with perfectionist overdubs of crashing, beautiful noise from one of the most revered albums of the ’90s, Loveless, no official new material has been released by the group. But that hasn’t stopped the ballooning hype. The band, now reunited amidst fervent fan appreciation, performed their first stateside gig (and co-curated) All Tomorrow’s Parties’ festival in Monticello, New York, this past weekend. And the foursome’s droning, swirling splendor is set to take center stage Monday night at New York City’s Roseland Ballroom in the first date of a two-night residency. Stuff your ears, Kevin Shields & Co. are set to bring the noise — albeit really, really pretty noise.

Who? My Bloody Valentine formed in Ireland in 1984 and released a handful of EPs that were initially deemed derivative. Soon Shields and drummer Colm Ó Cíosóig moved to London to form the band’s final lineup with singer/guitarist Bilinda Butcher and bassist Debbie Googe. The creation of the quartet’s epic noise symphony Loveless nearly sent their English label Creation Records into bankruptcy. But it also created a new genre of music, and went on to influence everyone from Trent Reznor to the Smashing Pumpkins. Alas, the band soon dissolved under pressure for a follow-up. But now two generations of MBV lovers feverishly await new material, which — Shield’s collaboration with Patti Smith and his contributions to the Lost in Translation soundtrack aside — is yet to be released. However, Shields has promised, with “100%” certainty, that new material will someday be released.

Fun Fact: It been rumored that while the tension mounted for My Bloody Valentine to produce a follow-up to Loveless, Creation Records’ Dick Green’s hair literally turned grey waiting for the album that never came.