The underground rapper launches a new campaign with his major-label debut, Murs For President. 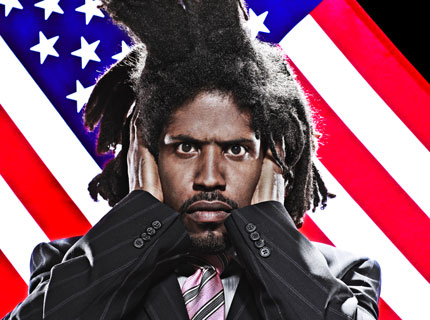 What? He may not have either the Democratic or Republican nomination, but California indie-hip-hop mainstay Murs (an acronym for “Making Underground Raw Shit”) is throwing his hat into the election ring with his seventh solo album and major-label debut, Murs For President, out tomorrow on Warner Bros. Murs For President finds the underground-rapper-gone-big-time retaining his verbose and engaging flow while sticking to the soulful, jazzy beats that have marked his best records, notably 2004’s Murs 3:16: The 9th Edition.

Who? Before signing to Warner Bros., Murs, a.k.a. Nick Carter, had been a fixture in the California underground hip-hop scene for over a decade, starting with his 1997 debut F’Real. Besides his critically and commercially revered collaborations with producer 9th Wonder on Murs 3:16 and 2006’s follow-up, Murray’s Revenge, Murs has worked with such respected rhymers as Mr. Lif, Aesop Rock, and Jean Grae.

Odd Fact: Murs has also collaborated with Atmosphere’s Slug. The duo’s two EPs, 2004’s A Tribute to Christina Ricci and 2005’s A Tribute to Lisa Bonet, drew inspiration from an argument between the two rappers as to who could have sex with the actresses first.

Murs Is Giving You 26 Hours of Boost Mobile-Sponsored Raps