Scotland's post-rock pioneers return with a new album that mixes thoughtful with thrash. 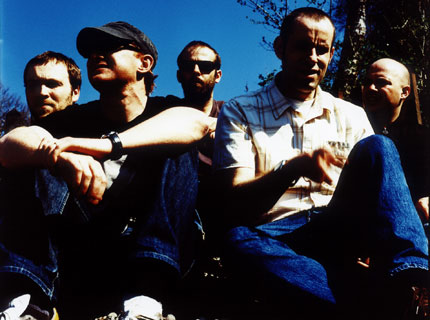 What? With song titles such as “I’m Jim Morrison, I’m Dead” and “I Love You, I’m Going To Blow Up Your School,” it’s easy to expect a fit of juvenile comic playfulness on Glaswegian post-rock titans Mogwai’s sixth full-length, The Hawk is Howling, out next week on Matador. Luckily, Hawk finds the quintessential quintet in sonic moods both pensive (“Local Authority”) and thrashing (“Batcat”) with nary a musical goof in sight. Both fans of Mogwai’s raucous, seminal 1997 debut, Young Team, and those who prefer the band’s later, more understated output, such as 2001’s Rock Action, won’t be disappointed.For a taste of Hawk’s sonic schizophrenia, download album cut “The Sun Smells Too Loud” below.