Minus the Bear Live at Bumbershoot 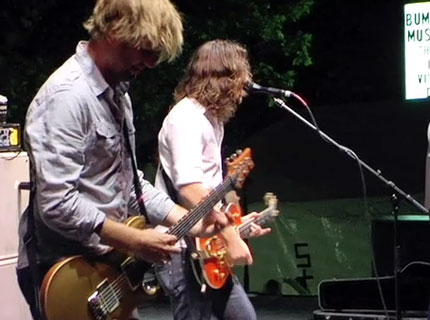 While fans fisted and elbowed their way to the front of Memorial Stadium Monday night for a closer look at festival-closing headliner Death Cab for Cutie, fellow Seattleites Minus the Bear mounted the Rockstar Stage across the festival grounds and — with their decidedly different math rock sound — showed Bumbershoot concertgoers that Ben Gibbard and crew aren’t the only heavyweights in town.

Playing tunes from one side of their catalogue to the other, including plenty of their excellent new LP Planet of Ice, this quintet diced and sliced Death Cab’s softy indie-pop to shreds with sharp, finger-tap guitar melodies, driving and intricate drum beats, and frontman Jake Snider’s spitting vocals. Death Cab may have hit the big time, but considering Gibbard and co.’s sleepy set, Minus the Bear’s tightly-knit sound and performance proved who’s pushing Seattle’s sound to the next level.

Below, watch video of the Minus the Bear performing “Dr. L’Ling” off of 2007’s Planet of Ice and “Thanks for the Killer Game of Crisco Twister” from 2000’s Highly Refined Pirates, and check back to SPIN.com all week long for more from Bumbershoot 2008!

>> Watch “Thanks for the Killer Game of Crisco Twister”

“Thanks for the Killer Game of Crisco Twister”

William Goodman
Tags: bumbershoot, Minus the bear, the wire, Videos