MGMT to Collaborate with the Chemical Brothers

What will the psychedelic warlords cook up on their forthcoming new album? Click here for details. 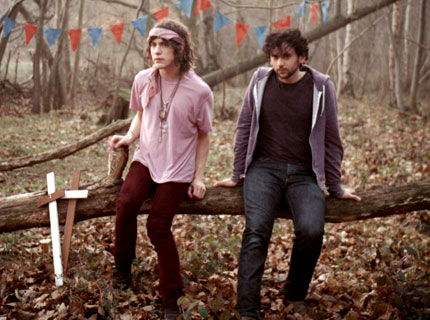 Nevermind the sophomore slump, psychedelic Brooklyn duo MGMT are pushing full speed ahead with the follow up to their debut, Oracular Spectacular, planning a collaboration with Brit electro-dance act the Chemical Brothers “to create a different sound,” MGMT’s Ben Goldwasser says.

“They’ve collaborated with people like Noel Gallagher before and they have this psychedelic side to them, so we’ll find common ground,” Goldwasser explains to NME.com. And though details have yet-to-be announced, MGMT’s second set is no modest affair: “We thought we’d go for the clichéd, overly-ambitious sophomore album,” co-frontman Andrew Van Wyngarden says.

But don’t expect the new album soon; Goldwasser confirms “it’s several months off” and that “there is always the risk that by the time we get there we’ll be on to something different.”