Southern rockers examine their dark side on their new album, Only by the Night. 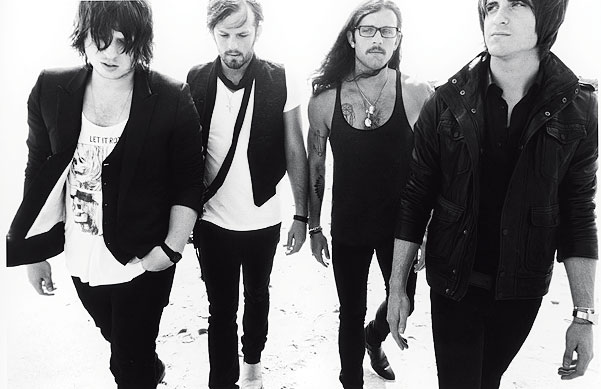 What? Since their breakout sophomore set, 2005’s Aha Shake Heartbreak, Kings of Leon have moved towards a larger sound, expanding upon their Southern fried roots. And while last year’s Because of the Times made vast inroads with a more wide-screen assault, their fourth studio effort, the ghostly and epic Only by the Night, is the quartet’s eureka moment. From the intense, mechanistic beats of “Crawl” to the gorgeously serpentine guitars of “Closer,” Night is a different kind of beast. Yet under this newfound, glossier surface, Kings of Leon present a gritty, Americana rock vibe in shrieking guitars and falsetto notes, notably with the grainy vocals and pop structure of “Use Somebody” and the charging “Sex on Fire.”

Who? The brothers Followill — Caleb (vocals/guitar), Jared (bass), and Nathan (drums) — and their cousin Matthew (lead guitar) embrace their roots and weave a Southern sensibility through the band’s oeuvre, beginning with 2003’s country-tinged debut record, Youth and Young Manhood. From there, the band’s eat-it-up tale — the ‘raised by a traveling Pentecostal preacher father bit — and a steady supply of ace tunes launched the boys into the limelight, notably in the UK, where the Kings have experienced astronomical success. Only by the Night, recorded at the Nashville’s Blackbird studios with local producers Angelo Petraglia and Jacquire King, is Kings of Leon’s attempt to match that success stateside.

Fun Fact: Only by the Night is named for a line in the stark Edgar Allen Poe poem, “Eleonora.”

Now Hear This: Kings of Leon, “Sex on Fire”