The Followills kick off their North American tour behind their just-released album, Only by the Night . 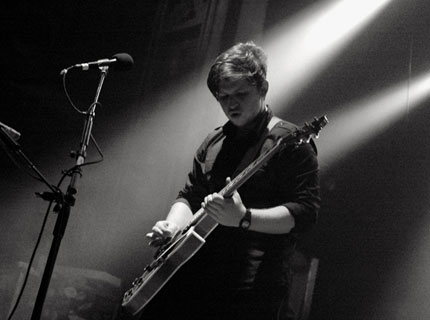 After more than a year of preparation — including studio time, summer festival gigs, an SNL appearance, and a SPIN cover shoot — Kings of Leon welcomed the arrival of their new album, Only by the Night, by launching their North American tour last night with a sold out show at New York City’s Webster Hall. Among the celebs in attendance at the high profile Southern rockers’ debut show: Drew Barrymore, Danny Masterson, and Gossip Girl stars Ed Westwick and Chace Crawford.

Kings of Leon, who kicked off their set with “Crawl” from their soaring new release, alternately had fans waving lighters, crowd surfing, and tapping their cowboy boots on the floor. Vocalist Caleb Followill’s impassioned drawl was met by chants from concertgoers, who already knew the lyrics to new tracks like “Sex on Fire” and “Use Somebody.” The Nashville natives also revisited songs like “Molly’s Chambers,” off the band’s 2003 debut, Youth and Young Manhood, and Because of the Times’ “On Call” and Aha Shake Heartbreak rouser “The Bucket.”

Although the quartet was light on banter, Caleb didn’t hesitate to express his gratitude for the crowd’s enthusiastic response: “I definitely wouldn’t want anyone else here besides you guys,” he insisted. Kings of Leon have admitted that Only by the Night saw the band drink record amounts of alcohol during its recording, and the usually stoic Tennessee rockers kept the mood celebratory with plenty of whiskey and cigarettes onstage. And it was apparent the festivities would go on well past the show’s end. As KoL’s set drew to a close, Caleb announced, “Hopefully I’ll see you at the bar!”

Ginny Yang
Tags: kings of leon, the whigs, We Were There