The Juno soundtrack made her famous, but the quirky singer/songwriter's new album pokes fun at her past triumphs. 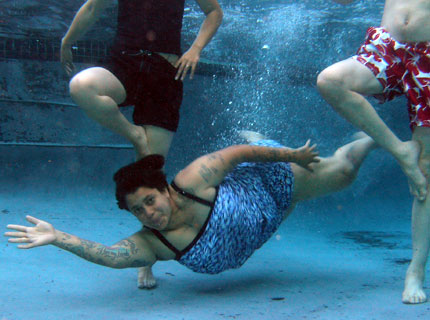 What? For the most part, fans of the late, great anti-folk duo the Moldy Peaches were delighted when former co-frontwoman Kimya Dawson’s superb solo work was featured in last year’s indie smash film Juno. But with Alphabutt, her first full-length since the movie’s release, Dawson decided to take advantage of her newfound popularity by releasing an album about… flatulence? With songs divulging the joys of child-rearing — farting, breast-feeding, and going pee-pee in the potty (in a song aptly titled “Pee Pee in the Potty,” no less) — the album leaves non-eight-year-olds better off sticking to Dawson’s other work.

Who? After spawning the best (and weirdest) drug-buddy ode since, well, the Lemonheads’ “My Drug Buddy,” with Adam Green on the Moldy Peaches’ “Who’s Got the Crack?” (off 2001’s The Moldy Peaches), Dawson began a solo career, releasing full-lengths on seminal indie label Rough Trade and the more experimental-leaning Important Records before settling into her current label home, K Records, with 2004’s Hidden Vagenda. When Juno’s soundtrack hit #1 atop the Billboard charts, Dawson was thrust into the limelight, hitting a — cough, cough — zenith of sorts with her and Green’s performance on the popular lady-chatfest The View.

Fun Fact: Possibly inspiring all the poo-poo and pee-pee humor, Kimya has a tattoo across her knuckles that spells the phrase, “LAFF LOUD.”