The G-Unit rapper unveils his new album during a concert, calling out West to yet another album sales battle. 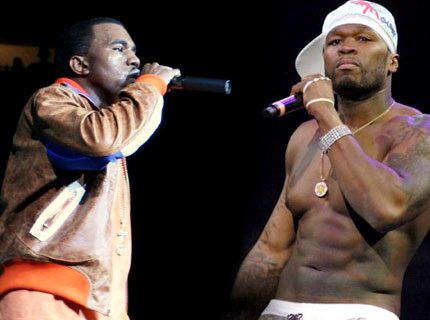 Get ready for round two: Just one year after hip-hop titans Kanye West’s and 50 Cent’s records — Graduation and Curtis, respectively — battled head-to-head in an album sales war (Fifty lost in a landslide) the G-Unit rapper has called for a rematch.

According to an MTV.com report, 50 Cent, a.k.a. Curtis Jackson, parodied West’s latest single “Love Lockdown” during a concert in Albany, NY, Saturday, telling fans that his newest album would be titled Before I Self Destruct with a December 9 release — just one week before the tentative December 16 date set for West’s just-unveiled fourth album, 808’s & Heartbreak. With the unpredictable shifting of releases in the hip-hop world, we could very well have another battle on our hands, which begs one question — is it possible for 50 Cent to dethrone West this time around? Sound off in the comment section below.