Piano pounder Andrew McMahon and Co. wax melodic about survival on their long-awaited sophomore record, The Glass Passenger, out today. 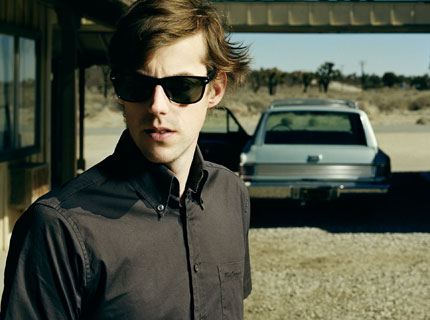 What? Andrew McMahon, former frontman of piano-punk outfit Something Corporate, knows a thing or two about the highs and lows of a music career.Shortly before his pop-oriented side project, Jack’s Mannequin, released their debut, Everything in Transit, McMahon was struck with leukemia in June of 2005. Thanks to a successful stem-cell transplant and an outpouring of support from his fans, McMahon made a full recovery and is back with Jack’s Mannequin’s heavily-anticipated sophomore full-length, The Glass Passenger. Ruminating on love, loss, and endurance, The Glass Passenger soars with melodic arrangements and vocal intensity, cementing McMahon’s status as not only a survivor, but also a songwriting success.

Who? While fronting Something Corporate, McMahon decided that he needed an outlet for his songs that didn’t quite fit the Corporate mold. Thus, Jack’s Mannequin was born, taking its name from both a song he penned, “Dear Jack,” and “The Mannequins,” a band name he had previously considered for his solo project. Besides playing the role of head doll in Jack’s Mannequin, McMahon has also worked with post-hardcore group Hidden in Plain View, as well as former Motley Crue drummer and perpetual tabloid fodder, Tommy Lee.

Fun Fact: Proving himself quite the virtuoso, McMahon learned to play the piano when he was nine years old and, allegedly, could perform intricate piano solos before he could read music.