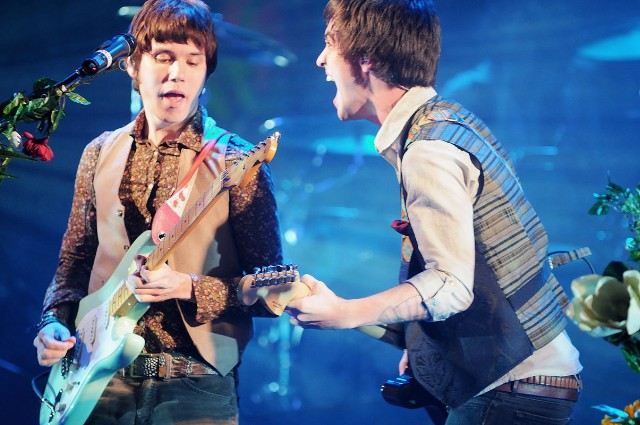 The Honda Civic Tour Panic At The Disco Eco-Challenge, a competition seeking essays formulating the best “green” idea, has finally crowned the winner: Laura Gonzalez of Denton, TX, has been selected by Panic at the Disco for her submission’s inherent merit and potential lasting effect on the environment. The prize: A brand new fuel efficient Honda Civic Hybrid!

Panic at the Disco had the final word in deciding on Laura as the winner. Says guitarist Ryan Ross: “What Laura wrote about using wind to generate energy really struck a chord with us. It’s a simple concept that has the potential to help solve a very complicated problem. We’d like to say ‘thank you’ to everyone who bought a ticket to the 2008 Honda Civic Tour for not only giving us a lifetime of memories, but for contributing to the most important cause in the world – the world itself.”

The nonprofit Green Energy Ohio (GEO), www.greenenergyohio.org, has been chosen to put Laura’s plan into action and will thus be granted a contribution from the Honda Civic Tour ’08 eco-fund.

Those of us at SPIN would like to congratulate Laura on her awesome essay and sweet new ride! Read Ms. Gonzalez’s full winning essay here.

The Gift That Will Keep Giving

While raising awareness about the condition of the environment is important, why not do something about it? With a budget of $50,000 there is so much potential! That much money should be an investment, something that will continue to flourish for years to come; not something that is spent and forgotten. The future of the environment is largely dependent on mankind’s ability to adapt. And in the case of the adaptation, the future is renewable energy. Renewable energy is the only way for man to have his energy demands met while ceasing damage to the environment.

The most feasible source of renewable energy is in abundance. It is everywhere. It has no beginning and no end and it has mesmerized man since the beginning of time. It is wind. It was first harnessed over 5,500 years ago with the invention of the sailboat. The first wind-powered machines were created in two-hundred BC by Persians. Today, an average one-megawatt wind turbine will produce enough energy for the annual needs of 350 average households! U.S. Department of Energy studies have concluded wind harvested in just three of the fifty U.S. states could provide enough electricity to power the entire nation, and that offshore wind farms could do the same job. The US manufacturer Southwest Wind power estimates a turbine to pay for itself in energy savings in five to ten years.

But where would we put a wind farm, you ask? Why, Honda has thirteen plants across North America. Imagine using wind power to build your automobiles. An environmental friendly undertaking to be proud of!

As a consumer, automobile driver, and Panic at the Disco fan, I would be proud to have contributed to such an endeavor by simply buying a ticket for a great concert. And, I’m sure people across the nation will be equally satisfied. In addition, I challenge Honda, SPIN, Alpine Mobile and any other sponsor to match the amount put into the eco-fund to exponentiate the impact of this fantastic endeavor.